If you're a fan of Canadian league soccer, you'll have heard this exact argument before. Allow me to proceed.

Canada is too big and has too few soccer fans to support a national, professional soccer league. The best we can hope for is limited, semi-professional, regional soccer like the Canadian Soccer League. Other than that, we should cling, limpet-like, to the belly of the American soccer pyramid and hope that they won't abuse us too badly. If we try to go off on our own and create our own league, it will inevitably die and we will return to the cruel days of 1986, when we had no league at all and our national team... okay, our national team qualified for the World Cup but that's not the point.

It's probably the oldest argument in Canadian soccer. It's the justification for our soccer system that functions at the will of the Americans, and it's the starting point for our sometimes acute soccer inferiority complex. A Canadian soccer league is impossible. The old, professional Canadian Soccer League existed from 1987 to 1992 and, after a promising beginning, finished with only six teams, most of which were more-or-less insolvent. It was successful enough on the pitch, providing a home for key Canadian international players like Bob Lenarduzzi, Dale Mitchell, Paul James, Mark Watson, Alex Bunbury, John Catliff, Paul Peschisolido, Lyndon Hooper, and Paul Dolan. It even got some national television coverage, with a game a week on TSN called by the legendary Vic Rauter. But it also crashed amidst waves of red ink and long-held grudges. That one failed experiment, eighteen years ago, has been held above our heads as a reason for Canada's continued lack of domestic league ambition.

Eighteen years is too damned long. But at least the Canadian Soccer Association is finally doing something about it.

Yesterday, as reported by Duane Rollins, the Canadian Soccer Association announced a moratorium on Canadian teams joining American divisions below Major League Soccer. The moratorium does not affect teams already sanctioned for lower levels, such as the Montreal Impact, FC Edmonton, Victoria Highlanders, or the rumoured Winnipeg USL PDL team. It does affect the rumoured Ottawa NASL team (which, mind you, has been rumoured at one level or another approximately forever). Some Canadians are naturally up in arms, assuming that the CSA has no plan and is indulging in a little mindless patriotism that risks destroying soccer in Canada. The Canadian Soccer Association has been mooting ideas for a national second division for years and the current Canadian Soccer League wants to expand the third division across the country, but never mind that: clearly we're going to go down the tubes.

Hardly. The American soccer leagues have never been as stable as their defenders pretend, while professional soccer in Canada is at an all-time high point in popularity. New stadia for several sports are being built across the country at public expense. In terms of the percentage of clubs that succeed, league soccer in Canada is probably stronger than in the United States. We're finally correcting an ancient mistake and looking north rather than south. The time for a Canadian national soccer league is now..

The truth is that there is plenty of room in the Canadian sports world for a national, eight-team second division. While the calibre of play is unlikely to be as high as the current North American Soccer League, there's no reason to believe that a sustainable national eight-team league with play comparable to the old A-League or USL First Division couldn't be formed. With time, such a league could improve its competitive standard just as the American second division did.

We certainly have cities ready to host soccer teams. The smallest market in the North American Soccer League is Bayamón, Puerto Rico, population 227,689 (though it is part of a metropolitan area over 2 million, like most American metropolitan regions said area is immensely spread out). For comparison's sake, Bayamón is slightly larger than Windsor, Ontario and is still home of one of the most successful clubs, financially, in North America. Meanwhile, competition for Canadian summer sports dollars is fairly minimal. Three of Canada's ten largest metropolitan areas (Ottawa-Gatineau, Quebec City, and London) are without professional soccer or Canadian football, the only two summer sports played professionally in this country. Of the next ten largest markets (all the way down to #20, St. John's, Newfoundland), only Regina has a CFL team and none has a soccer team above the semi-professional level. There are problems with stadium availability and committed ownership in some of these markets, but they exist.

There are also obvious advantages to an all-Canadian second division. Right now, Canada's player development system relies heavily on the United States. The United States Soccer Federation has always taken an ambivalent position on developing Canadian talent: for example, Major League Soccer recently announced that Canadian players will count as internationals on American MLS teams, but American players will count as domestic on Canadian teams. This puts Canadian players at a heavy disadvantage in the MLS labour market. Similar rules have prevailed in the second division for years, meaning that middling Canadian players have had a far harder time finding employment than their American counterparts. A Canadian league, with Canadian quotas, would assure our players of a home. It would also allow for an all-Canadian development path: players could enter a Canadian soccer academy, make one of our MLS teams if they were good enough, and if they weren't still catch on with a selection of second-division teams that would allow them to make a living, or in one of dozens of third-division clubs that would at least give them a place to play. The likes of Teal Bunbury would be far less likely to "feel American" if they had spent their careers in Canada, with Canadian teams, learning Canadian soccer in the Canadian way rather than constantly looking up to the United States. 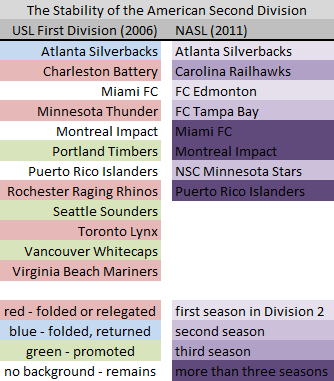 Nor has the American second division been even remotely stable. Of the twelve teams that competed in the 2006 USL Division One season, only three will remain in the second division for 2011 having played every one of the just five years since. Of those three teams, the Montreal Impact will be in Major League Soccer by 2012 and the Miami FC Blues are a catastrophically money-losing club with attendance in the low three digits run as a loss leader by Traffic Sports USA. This is all without considering the continuing civil war between the rival NASL and United Soccer Leagues organizations, which have torn American professional soccer into two warring camps and caused additional franchise instability. There's the possibility that there won't be an American second division at all next year: the United States Soccer Federation would have to waive its own requirements just to sanction the NASL. The American second division is highly volatile, and has been for its entire history: not exactly a "safe" choice.

Canada would do well to look at the Canadian Football League model. The CFL has seven teams, some of which make great fistfuls of money and none of which are in immediate danger of insolvency. All are located in decent stadia and stable markets. Of course the CFL draws significantly more fans than any second division soccer team would, but they also play a far shorter schedule and have a salary cap three times that of Major League Soccer, to say nothing of a hypothetical Canadian second division.

The truth is that, if you have a decent stadium and the patience to let a market grow, second division soccer's requirements are nothing excessive. The break-even point in the old USL, depending on the market, was around 3,500 fans per game. That's not a lot. A big deal is made of travel expenses in an all-Canadian league, but the flight from Vancouver to Austin, Texas was no better than the flight from Edmonton to Halifax, Nova Scotia. Canada's current second division business model already relied on finding teams that could pay an arm and a leg for travel and get those 3,500 fans. The only question is whether we have eight markets which can support that level of soccer, and it's hard to believe that we don't. Even now, amateur teams like the Victoria Highlanders and Forest City London draw upwards of 2,000 fans per game to watch a far lower level of competition against regional opponents. The fans are there.

Some fuss is being made over the loss of the USL PDL, but Canada already has a perfectly viable league playing at that level. The Canadian Soccer League, though operating only in Ontario and Quebec, is a good semi-professional league capable of filling the USL PDL's niche of regional competition aimed at university players outside of the scholastic soccer season. There are three successful USL PDL teams in British Columbia: if you combined them with the cream of the Pacific Coast Soccer League, the Vancouver Metro Soccer League, and the Fraser Valley league, you could have a domestic, regional third division tomorrow. The situation is even better in Ontario, our other USL PDL hotbed, where the CSL is already successfully established.

The question for domestic Canadian soccer leagues has never been the availability of a market, but the lack of will from the game's highest levels. Canadian soccer administrators have been too concerned with protecting their own fiefdoms to risk real change. The CSA's recent announcement is one more indication that the old, rotten structure is being rebuilt at last. It's not a moment too soon. Sure, establishing an all-Canadian league would involve running risks, but so did having Toronto FC joining Major League Soccer. All great rewards come with risk, and the rewards for a domestic Canadian league are very great indeed.