Just Because There's A Roof Doesn't Mean It Can't Rain

Share All sharing options for: Just Because There's A Roof Doesn't Mean It Can't Rain 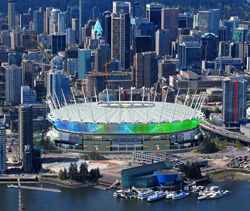 Remember all that drama on the BC Place renovations potentially being cancelled? Ah, those were good times. People were panicking, there was a thread on the Southsiders board titled "could our mls dreams be over?" that ran to five pages, there was all sorts of conjecture that the BC Liberals were going to throw the renovations into the can because if there's anything that British Columbia politicians are known for, it's fiscal restraint and not buying goodies for downtown Vancouver.

Adding to the ridiculous furore was that BC Place already has a roof. It's an awful roof, essentially a balloon stretched the concrete block of the stadium, but it keeps rain off unless it bursts, which only happens once in a while. The three advantages of a new roof for the Whitecaps would be that it is retractable, it would allow them to curtain off and conceal the upper decks, turning a cavernous 60,000-seat pillbox into an intimate stadium of 28,000 seats or so, and that it probably won't kill anybody.

In the renovation package for BC Place approved in January, the roof was pegged at $200 million of the $365 million total cost, all for a stadium that was built for $126 million 1981 dollars. The renderings of the renovated BC Place are attractive, but we're left with the fact that if the renovations go forward British Columbia taxpayers are paying just south of $400 million to renovate a football stadium to no obvious benefit.

The renovations have little to do with the Olympics and most of them (including the roof) couldn't possibly be ready by the opening ceremonies. And even if you're one of the dwindling number of observers who believe that publicly-financed stadia pay for themselves by stimulating growth, it's even harder to argue that a new roof and nicer concessions for an existing building will have any positive effect.

Best of all, this government boondoggle is being shoved down the Whitecaps' throats. They don't actually want the stadium: Whitecaps owner Greg Kerfoot has spent several years trying to build a privately-funded stadium in downtown Vancouver near the Burrard Inlet.

Unfortunately, the Whitecaps Waterfront Stadium bid has been marred by large, well-financed organizations of concerned citizens that don't actually have any concerned citizens in them as well as Vancouver's usual population of hippies and kooks who oppose anybody making money off of anything ever. Kerfoot's proposed site for the stadium, pictured to the left currently houses a parking lot and a helicopter landing pad near some railway tracks, which isn't anyone's idea of the Spirit of Old Gastown.

For some reason, although BC Place is a taxpayer-funded scam that is home to the much more popular BC Lions as well as MLS Vancouver, the Whitecaps seem to come in for a unique amount of abuse. The newspaper of Douglas College, displaying the sort of editorial insight and keen journalistic intellect that has been associated with campus newspapers since the dawn of time, ran a satirical article saying that the Whitecaps had eleven fans and they were all drunk drivers. That's just offensive. If I wrote a post saying that Toronto FC fans were a bunch of Johnny-come-lately types with no interest in the game beyond the south stands at BMO Field, I'm sure somebody would call me out on it.

Objections have included the idea of the Whitecaps tearing down Crab Park (which the proposal doesn't include, specifically setting the limits to the stadium outside of the park so all the druggies from the Downtown Eastside won't be disturbed), environmental damage (what, is the stadium being made of uranium and puppy corpses? This isn't a steel mill.), and, in a few particularly inspired cases, the objection that since Greg Kerfoot is an investor in Vancouver's Edgewater Casino and therefore those dastardly Whitecaps will secretly slip a casino into this stadium without anybody knowing (seriously).

It's also said by people who actually have jobs that traffic and spectator density will be an issue. Why this isn't an issue for the home of the Canucks (GM Place), which is within walking distance, or the million-odd people who commute into downtown every day goes unexplained. Also, nobody is nice enough to mention how having BC Place hosting the Whitecaps in a slightly different part of downtown Vancouver is suddenly much better. Possibly the same magic traffic fairies who brought us "Sure, Let's Tear Up Granville Street To Build a Subway Line, That Won't Inconvenience Anybody For Three Years" will take care of this. 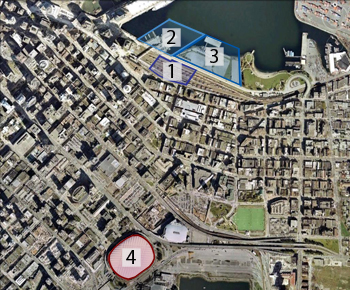 The stadium was originally planned to be located near Vancouver's Waterfront Station over former Canadian Pacific Railway property. The Whitecaps own this site (marked as #1 on the map to the left) but the location was determined to be impractical, causing the Whitecaps to negotiate with the Port Authority for another site directly on the water, nearby the original location but involving the reclamation of some land and the demolition of the Seabus terminal (site #2). Because of the impact on the Seabus and port traffic, negotiations have since moved to another location directly east of that site (#3). The Vancouver port authority has been the main obstacle for getting the stadium approved, but they've at least been negotiating (the hot rumour is a land swap between the Whitecaps and the port authority). BC Place is shown to the left as #4, for reference. The distance between the left and right edges of the map is about 1.83 kilometers.

The waterfront location has a number of advantages. Environmentalists and transit wonks should be enthusastic, as it is located almost on top of the Waterfront public transit exchange where the three Skytrain lines, the commuter West Coast Express train, and a bundle of bus routes all intersect. The second plan would have mutilated the Seabus service, but this has been mercifully corrected. The waterfront stadium would be adjacent to Crab Park, but forty-year-old Swangard Stadium is located in Burnaby's Central Park and so far the park has not been burned down in an alcohol-fueled orgy of destruction. Moreover, unlike western Burnaby, there are a number of taverns and restaurants in Gastown that would benefit from the increased business of a waterfront stadium, and the area is accustomed to handling a large number of revelers.

Ultimately there is no reason not to let the Whitecaps build a stadium on the Vancouver waterfront. The real concerns about earlier proposals have been ironed out, and what's left is a combination of groundless fearmongering and knee-jerk armchair fascism saying that Private Property is Bad and that we must be careful lest an addict-riddled park be marred by people actually enjoying it. The alternative is a ridiculously expensive and largely unnecessary stadium project being thrust upon an already overtaxed public that will enjoy absolutely zero return on investment.

So it's only natural that British Columbia is so far taking the insane route.