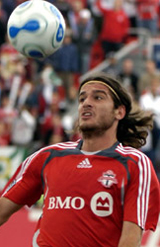 Update, August 10 1:09 PM: The story that seemed too good to be true, as Canadian soccer luminary VPjr informed me in the comment thread. In spite of claims and articles and Wikipedia entries to the contrary, this is a different Andrea Lombardo.

The real Lombardo's fate is kinda funny, though.

Really, there's no way the story can beat that headline.

You've forgotten about Andrea Lombardo? Well, I can't blame you. He was Dale Mitchell's target man for the abysmal 2007 Youth World Cup, beating out such bums as Julian Uccello. He didn't score during the tournament and never really looked like he could. But his club career was so promising: he played with such famous sides as Atalanta (never scoring), Perugia (never scoring), Rieti (never scoring), and of course Toronto FC (seventeen matches, zero goals).

He got the hype ("unbelievable stamina", raved John Molinaro of CBC.ca). But he did go on to play for York University after being cut by Toronto, and got national attention for being completely ineligible and costing York four games as a result. York obviously cut him loose after that, and Lombardo faded into the obscurity which is the birthright of all Canadian footballers.

Well, you've heard of the Hyundai A-League, of course: the best league in Oceania for what that's worth. The level below that is made up of the various state leagues, including the Victorian Premier League. The level below that is the Victorian State League, Division One: Whittlesea is in the Premier League but is mathematically assured of relegation to the State League with two games left to play as Whittlesea sits on six points and safety is all the way up at twenty-four.

Whittlesea is certainly excited about their new acquisition. According to their own website, "the Whittlesea Zebars have hit the recruiting market hard" (and as soon as Toronto's webmaster calls them Toronto CF, I'll go back to making fun of MLS). Lombardo is listed as "Andrea Lombardo (Italy)", which is a nice way to get around saying "Andrea Lombardo (welfare)".

Of course, it's probably marketing. Whittlesea is a big team for Melbourne's Italian community and has a tonne of Italian passports on their roster, including their star Greg "No Relation" Lombardo, and nobody (not even a future third-division team) brags about signing a guy who even Toronto FC thought was a poor goalscorer, or advertise getting the former golden boy of Dale Mitchell.

I'm going to go ahead and say that Lombardo's not going to be in the national team picture. Call it a hunch.

By the way, the guy who Lombardo beat out for target striker on that U-20 team, Julian Uccello? Currently getting contract offers from Serie B and Serie C1 teams. Just for reference's sake.