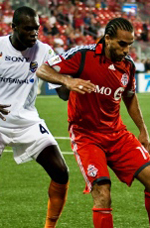 I'd be lying if I said I hadn't took a little pleasure from Toronto FC's undignified, goalless implosion to the Puerto Rico Islanders last night that sent them spiralling out of the CONCACAF Champions League faster than an eagle flying through a jet engine. After all, Vancouver deserves to be there (say I emotionally) and Toronto doesn't, so it's only justice. Justice delayed is justice denied, they say, but I'm not sure that works in football.

On balance, though, I was cheering for Toronto. Us Canadians are all in it together, and since I don't have that derby-like hatred for the FC I was happy to root for our sole representative in the continental championship, just as I did for Montreal all those centuries ago.

It was a letdown. Not on the level of Montreal losing to Santos Laguna, which was like having a marksman shoot at your crotch for ninety minutes plus stoppages. But it was a dreadful disappointment made worse by the fact that Toronto never looked like they were a match for the lowly Puerto Rico Islanders.

I just heard three million Torontonians spit their Molson Canadian onto their monitor. Calm down. Toronto is more talented, man for man and as a unit, than Puerto Rico. Dwayne De Rosario could probably beat the combined Islanders starting eleven in keepie-uppie. But, with the exception of two bull-in-a-china-shop chances by the only player in MLS who is both a striker and a zombie, Danny Dichio, Puerto Rico bunkered down and Toronto was helpless to do anything about it.

Bunkering down is a skill like any other. It's a skill that Toronto (and the Impact) have never possessed. Breaking down the bunker is a skill as well and Toronto came up short once again. Toronto had the better players but Puerto Rico was the better team. They earned both their win in Toronto and their draw back home. Skill doesn't mean a damned thing if you can't do anything with it, and Toronto was left flailing their limbs while their fans grumbled about "anti-football".

The 2008 Montreal Impact could give a doctoral thesis on this, but if you're going for a scoreless draw against a more talented side, you can't just put eleven men in the box and have them do their thing because you'll get shredded. You have to do what Puerto Rico did, which is smart zonal marking, frustrate their strikers with chippy, borderline plays, use good direct balls to relieve pressure, and when you get that counter you go for it.

Puerto Rico is a good team; likely the best in USL-1. Certainly I'd favour them at a neutral site over a number of MLS clubs: Toronto FC, New York (obviously), probably FC Dallas, and you could convince me on one or two others. But they win all their matches the same way they beat Toronto. They play the same style against the Carolina Railhawks and they'd try it against Manchester United, because they're good at it and therefore it works.

So hold your heads high, Toronto fans. You got beaten by a better team.

That doesn't make you feel any better, does it?