Treason (or: Loyalty is Nothing)

Share All sharing options for: Treason (or: Loyalty is Nothing) 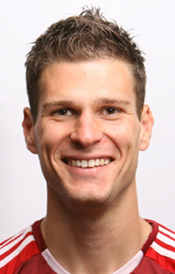 On Full Time (Vancouver's soccer show!) last Sunday, that media-friendly imported Canadian hero Stephen Hart spoke to the TEAM's Mike Martignago and Tyler Green and, in spite of his downhearted demeanour throughout the interview, managed to get through the entire thing without shooting himself.

Hart's a good interview on a number of levels. For one thing, unlike Dale Mitchell, he actually gives them. Also, he tells the truth, which gives him a big leg up on certain Yugoslav-born goalkeepers I could mention. When asked about Asmir Begovic, Hart said that the prospective traitor is "leaning towards Bosnia."

First off, full disclosure. Stephen Hart is a very bright man, but he is an employee of the Canadian Soccer Association and the CSA has made having no idea what's going on into a fine art. It's entirely possible that Asmir Begovic is dealing with the impending birth of his first child, thinks that he blew that whole Bosnia rumour to bits earlier on Full Time, and Stephen Hart is simply as panicky and used to this sort of thing as we are.

But if it's true. Good god.

I hate today's international game like it killed my father. The overtly mercenary nature of the teams deprives the sport of meaning and makes me a sucker for caring about it. I can't stand Sepp Blatter, Jack Warner, FIFA, and everybody who has ever worked for them. But the players are only variably guilty; I've always said there are three sorts of defectors, some more culpable than others:

That's it. Three levels, in ascending order from "good guy in a bad situation" to "scumbag". Then FIFA brought in that new rule and by god, we have a level four.

I have strong feelings on this. It's one thing to leave a country as a refugee and say "I will always be grateful to Canada for completely saving my family's asses, but in my heart of hearts I am Bosnian and always will be." I'd understand that (an Ottawa resident, Mahir Hadziresic, was called up to the Bosnian U-20 squad but nobody minds for that reason). It's another thing to arrive in Canada at eleven years old, come up through our ranks, get into our youth setup, take advantage of our training, our facilities, and our money, and then as soon as Bosnia shows any interest leaving us at the altar with the wedding already paid for, without even having the stones to tell the truth.

It has nothing to do with freedom of labour or even FIFA regulations (in Lord Bob's FIFA, Begovic would be eligible for Bosnia until cap-tied because he was born there). It's a matter of not being a complete dirtbag. And if the rumours are true then, well, I just became a Serbian White Eagles fan.