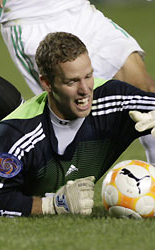 The Scottish Premier League is bad, and Falkirk is worse.

Scotland's footballing landscape these days is an all-too-familiar one. Celtic and Rangers are Celtic and Rangers. Some clubs are staying afloat, and the rest are acting exactly like I would if I owned a football club, trying to get new signings with the change in the couch cushions and refusing to answer the phone because you know it's just a bill collector threatening to cut off your Internet access.

But it's still the third-best league in the British Isles. It's still a step above Romania or Greece or any of the other recent haunts of Canada's lost generation of goalkeepers. And playing Celtic and Rangers is a step above playing Port Vale and Huddersfield, which is why I was so pumped up when Josh Wagenaar signed with Falkirk last week.

Pumped up and blown away. Wagenaar split his starts last year at Yeovil with the enigmatic Asmir Begovic before Begovic was recalled to Pompey and did not get rave reviews. Yeovil offered Wagenaar a contract to remain on but at no point did he look like he deserved to be anywhere other than where he was. Yet he refused to sign the contract because he wanted to play at a higher level, and now, improbably, he is.

Falkirk is not the best environment for Wagenaar to surface in, though. Last year the Bairns escaped relegation by the narrowest of margins by beating Inverness no the last day of the season, while mounting a surprise Cinderella run in the Scottish Cup. But the manager of that remarkable season, "Yogi" Hughes, has left for greener pastures, as did quite a few of the players. New boss Eddie May is getting his first taste of management after coming through the ranks as a player and a youth coach. He's brought in seven new players and the order of the day is "saving money", which explains the former mid-table League One goalkeeper.

The good news for Canadian fans is that Wagenaar will compete with incumbent Robert Olejnik for the starting spot, a 22-year-old Austrian best known for some junior international caps and being an Aston Villa youth player once. Olejnik got the start for Falkirk's season debut, but Wagenaar's been getting all the press and the Falkirk media seems excited about repeating the words "Canadian international" as often as possible (just to clarify for any Scots reading: two caps, both friendlies, not impressive, rode the pine at the Gold Cup to Greg Sutton's worst goaltending performance since the early nineties).

Can Wagenaar take the starting job? That depends on Olejnik, but the management seems to be open to the possibility and pleased with Wagenaar so far. It'll be a big step for Wagenaar if he manages it, but he'd have to be a hero for Falkirk to survive the drop this season.

If he pulls it off, though, I think Lars Hirschfeld might have a backup.