Canadians in the Football League, 2009

Share All sharing options for: Canadians in the Football League, 2009

It's a quiet time of year for Canadian football. Toronto is falling into their usual non-playoff obscurity, Montreal is a shambles, Vancouver is struggling, the national team is inactive and its prospective players are searching their family trees for grandfathers in other countries. The men's team isn't going to play a competitive match until 2011 (and, knowing the CSA, going to have one friendly against Moldova until then). Makes it hard for a blog focused on the Canadian national program to find material.

So I'm copping out. I'm looking overseas. 2009-10 is going to be a good season for Canadians in the English Football League, and like seemingly everyone else in the world I'm going to have a look at those lucky few. Canadians will be playing in every level of the Football League from the Premiership to League Two, and here's a brief glimpse at the ones who matter.

Yes, it's a cheap gimmick. Yes, it ignores the Canadians playing at a high level in countries that aren't England. Don't worry, unless Jacob Lensky retires again or another Andrea Lombardo who isn't actually our Andrea Lombardo signs with the Mongolian ninth-division champions, I'll probably get to them. 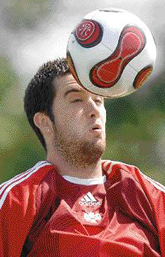 David Edgar (DF, Burnley [EPL]): A former U-20 player with zero senior caps! His father is English, making Edgar eligible for the country he plays in! Declined a callup to the Gold Cup which would have captied him! Aaaaaaah! Aaaaaaaaaah! Aaaaaaaaaaaah! Fit that man for Owen Hargreaves's old jersey already, it's over!

Mortal panic about his nationality aside, Edgar had the best preseason of any Canadian anywhere in the world. Signing with Burnley on a free transfer was the perfect move for Edgar, who will be getting first team minutes on a Premiership side that has a chance of avoiding relegation. Unlike Newcastle, he won't be playing in a bankrupt cesspool of resentment but for a promising club on the rise. His reviews were generally positive in preseason play, although he was unremarkable: pretty much David Edgar's life story to this point.

Edgar is twenty-two, and if he's for real this is his best chance to show it. Edgar played nineteen first-team matches with Newcastle over the years and didn't particularly impress the Magpies faithful. Newcastle (as our resident Newcastle fan pRoke could tell you if he ever wrote a post) was not the best team for a youngster to prove himself on, but at some point if Edgar's going to make a career in the Premier League, he'd better look like he belongs sooner rather than later.

Asmir Begovic (GK, Portsmouth [EPL]): Only arguably Canadian, but if he is he's our second-most important player. Before the season began there was an expectation that Begovic would be Pompey's backup behind the seemingly invulnerable David James (the British Pat Onstad), with 28-year-old incumbent backup Jamie Ashdown out of favour at Fratton Park. Unfortunately for Begovic, Pompey recently signed Finnish veteran Antti Niemi, who I thought played for the Chicago Blackhawks but turns out to have a rich English league history, recently starting at both Southampton and Fulham before prematurely retiring with a wrist injury.

As a result, Begovic's role in 2009-10 seems to be the same as his role in 2008-09, with predominantly reserve duty, maybe a short loan spell to a desperate Championship or an optimistic League One side, and perhaps one or two games with the first team when their pensioner goalkeepers need a night off. This isn't the development any of us were hoping for from Begovic, and the acquisition of Niemi indicates that, for whatever reason, Paul Hart doesn't think the twenty-two year old can carry the mail yet. Possibly he's afraid Begovic will turn up playing for Plymouth all of a sudden.

David Hoilett (FW, Blackburn [EPL]): He's on this list for completeness's sake, but the smart money is that Hoilett will be playing for neither Canada nor Blackburn in the coming year. His national loyalties, though ambiguous, seem to lean towards Jamaica. On the club end of things, in spite of a landmark court case to get a work permit this year Hoilett seems most likely to enjoy either another loan stint or a season spent on the bench and with the reserves.

Hey, no complaints! Jesus, the kid's nineteen! He's scored a brace in the friendlies and he's impressing everybody after his preposterously promising loan last year to FC St. Pauli. If he does go to Canada, a strike force of Jackson and Hoilett in five years time would be positively frightening (yes, they're both short, but when was the last time Canada scored off a header anyway?). Despite missing the end of the 2.Bundesliga season with a broken foot, fitness does not seem to be an issue. If I were Blackburn, I might loan him out to the Championship and let him get first-team experience against men, but at some point this season I expect Hoilett to be the first Canadian striker to run onto a Premier League pitch since Tomasz Radzinski.

Jaime Peters (DF/MF, Ipswich [CC]): Ah, Jaime Peters. The Patron Saint of Lost Footballing Causes, the man who has been just around the corner from stardom since Frank Yallop was manager. When Roy Keane took over in Ipswich, every Voyageur knew immediately: that was it. It was over for the dynamic but sometimes flakey Peters in England. No way... no way... would Keane give Peters minutes at any position other than towel boy. We might as well fit him for his Charleston Battery jersey right now.

Then, late last year, an injury crisis forced Peters to come off the reserves and play at full back, where he did pretty well, actually. Then he showed up in training and busted his ass, got called to the Gold Cup, and last weekend made a start at central midfield for Ipswich where he was, according to witness reports, terrific.

Yes, yet again us Canadian supporters have been drawn into the endless game of holding out hope for Jaime Peters. Whatever corner he had left to turn, he has by all accounts turned it. Keane believes in him enough to put him in a central starting role to open the season, and one match in Peters has repaid that trust. It's like a dream. Jaime Peters is finally putting it all together? This could end very, very well.

Or he could revert to his typical form and wind up on the reserve team. But I believe in him (again). 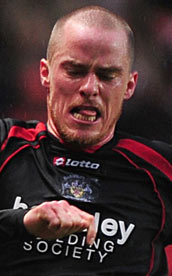 It's saying something for Humey that he's even on this list after getting his head split by one of the dirtiest men in football last year. In preseason friendlies, he looked like how you'd expect somebody who was out of shape on account of his near-fatal skull injury to look and the Barnsley management has said that Hume won't feature in the team straight away until he gets his match fitness back. But, hell, it's just lovely to see him again.

We won't know until he plays a little whether he's the same Iain Hume we all know and love, though. We can hope so, but our hopes aren't the issue.

Simeon Jackson (FW, Gillingham [L1]): The Great Canadian Hope! Heir apparent to Dale Mitchell as a pacey short guy who somehow manages to score a garbagebag full of goals no matter who he's playing against! This is a guy who was born to be a Vancouver Whitecap and score nine billion goals over a six hundred year MLS tenure before retiring as a hugely popular and inexplicably productive old man with a potbelly and moving into an ultimately catastrophic management career.

Yeah, he only has one international goal, but in fairness his international career started this past spring. And after a hat trick in an out-of-a-bad-novel 5-0 Gillingham win, he's scoring three goals per League One game in his career and should be the league's all-time leading scorer by March or so.

I love Simeon Jackson. Love love love Simeon Jackson. This kid came onto the scene in the Conference National with Rushden and Diamonds and scored a lot, then people said "ah, but let's see if he can do it in the Football League". Then he moved to Gillingham and scored a lot, but people said "that's just League Two, let's see what he can do in League One!" So far, so good.

Jackson has a history of burying the tough chances. His pace matches up with any striker in England. With his skill set, given time to adjust there's no reason he can't thrive in League One or even beyond that. If Gillingham wants to stay up they'll need a lot of production from Jackson, and if he's healthy they'll get it. 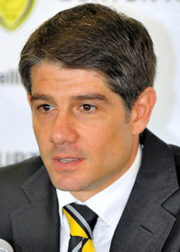 Paul Peschisolido (Manager, Burton Albion [L2]): Oh, Pesch. You're basically English in spirit. Can't blame you, you've lived there a while. But whenever some hack writes an article about you in an English paper, it'll be emblazoned in type for the world to see: "Canadian-born manager Paul Peschisolido."

The first Canadian manager in Football League history, Peschisolido's only previous backroom experience was four months as assistant to Jeff Kenna at Ireland's St. Patrick Athletic. It's pretty sparse experience but Burton Albion is a pretty lousy team: freshly promoted from the Conference National, and the jump between Conference and League is as great as any in England. Burton Albion is everyone's favourite for the drop and if Peschisolido manages to save them that will be an awfully big feather in his already crowded cap.

Terry Dunfield (MF, Shrewsbury Town [L2]): Terry Dunfield is a vision of what David Edgar's future might be. A talented prospect in the Manchester City system, Dunfield started out with rave reviews but never lived up to them, and his career gradually slumped down, down, down. He scored a goal per game (really) for the Canadian U-20s but never got a sniff at the senior team. Now he's with a respectable League Two side and didn't even get into the game to start their season.

Nothing against Dunfield. He's a respectable Canadian, by most accounts a decent human being, and not a half-bad footballer. He and Shrewsbury Town would have made it to League One last season but for the intervention of Simeon Jackson popping Josh Wright's corner into the goal at Wembley Stadium. But it hasn't been going his way the last few years, and if he's going to be a bench player in Shrewsbury that's just another disappointment for the twenty-seven year old in a career full of them.