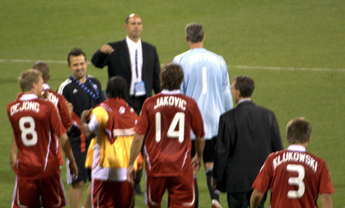 That was the date on which the Canadian men's national team last won its fourth game in a row. It took place at Varsity Stadium in Toronto, and Canada dropped Trinidad and Tobago 1-0 in a friendly thanks to a goal from Jeff Clarke, his first and it turned out last with the national team.

A friendly win wasn't all that remarkable, of course. What was remarkable were the three games we won before it: the quarterfinal, semifinal, and final of the 2000 CONCACAF Gold Cup. Now we have once again won four on the trot for the first time in almost a decade, and once again the Gold Cup is our vehicle to do it.

I'm taking a long time to start talking about the match. I think I'm afraid that if I think too hard about it, it'll turn out to be a dream. Good christ. If Canada played more matches like that we'd have run out of room on the south side of Crew Stadium for our championship banners. I don't care what the scoreline said: we always had an element of control in the match and it never truly seemed like it would slip from our grasp. Of course we were terrified in the supporters' section, but that's because we're Canada fans, not because Canada didn't deserve to win going away.

Full credit to the Salvadorans. They played us every bit as hard as they played Costa Rica (their support was incredibly numerous in Columbus as well). We just played them harder.

Our midfield, which I harped on in my Jamaica review, came through in fine style. There were no passengers. Will Johnson created a couple of glorious chances, one of which he just missed burying in the second half, and was a thorn in the side of El Salvador the whole match. Josh Simpson wasn't as electrifying as he was in Los Angeles but he was reliable, occasionally spectacular, and discharged his responsibilities. Patrice Bernier made the goal, missed a sitter, and was in the right position so often it was like he'd come back in time and knew which plays El Salvador would try. Johnson and Simpson were both playing forward a lot and were strikers on paper, but their role turned more into attacking wingers particularly late in the match.

And Julian De Guzman. And Atiba Hutchinson. Well. In my preview post, I said they ought to be the best players on the pitch. They were. Julian's fro apparently gives him super powers, and if he's trying to impress a club in Europe he couldn't have done a better job. Atiba got a nice chunk of glass for being the official man of the match, and his attacking runs were almost embarrassing for the Salvadorans, who were left with no answer. On one occasion in the second half Atiba made a move, missed it, and got stripped of the ball. I remember the Salvadoran midfielder - don't remember which one, I had a bit of beer in me by this time - charging up the pitch, trying to play it through, losing it to a Hutchinson who had charged back to defend like his hair was on fire, and the Salvadoran wearing the most perfect "where the fuck did he come from?" expression I have seen in some time.

The backline was less dominant than they were against Jamaica, but there's no shame in that and there were no errors, aside from Stalteri getting a yellow on a blatant dive by the Salvadoran (Klukowski's yellow was both deserved and a good play on his part to stop a chance). I am nursing a massive mancrush on Dejan Jakovic, who was the star of the defense once again and is still only twenty-three years old. This will end in an embarrassingly complimentary chant, I'm sure.

And today was a milestone in one other regard. Ali Gerba is now tied for fourth all-time on Canada's goalscoring list with fifteen senior goals. The man he is tied with is an obscure Toronto midfielder by the name of Dwayne De Rosario, who you may recall opted to stay home from this tournament. I get the impression that De Rosario isn't going to pass Gerba again, either.

Below: the banners on the Voyageurs section, as seen at halftime from the north end. Click for a larger image.