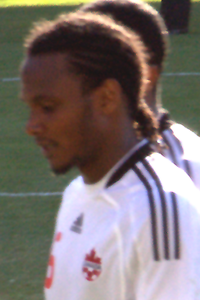 If you haven't heard the latest report of Julian De Guzman's potential free transfer to Toronto FC, you're either a basketball fan who accidentally searched for Martin Nash instead of Steve Nash or living under a rock.

The Toronto fans who blamed Maple Leaf Sports and Entertainment for not spending money on Toronto FC never had much of an argument and now have even less of one, for the contract (De Guzman confirmed on It's Called Football this morning that he had received an offer from Toronto) would, according to Ives, make Julian De Guzman the second-highest paid player in Major League Soccer. He's probably not the second-best player in Major League Soccer - I'd place Donovan, Keller, probably Blanco, and frankly probably De Rosario ahead of him - but there's no doubt he'd instantly make Toronto an MLS Cup contender, particularly if the cap hit only required them to jettison role player Carl Robinson.

And as a national team supporter, I'm leery.

We know that De Guzman has offers on the table from La Liga and the 1.Bundesliga, both high-end European leagues. MLS is a couple steps below the German first division, so right away one of Canada's best players would be moving to a markedly inferior league for the sake of money and sentiment. This might be forgiven if it would conspicuously increase the profile of the game in Canada, but De Guzman, for all his success in Spain, isn't the most high-profile Canadian footballer. Dwayne De Rosario, to pick one, has always been much better-known to casual North American fans, who embrace flashy offensive stars much more readily than steady defensive midfielders who play a continent away and have never achieved much with the national team.

De Guzman would, of course, be famous simply because of his being Toronto FC's designated player, and the soccer-savvy world would be thrilled with the signing, but they're not the ones who we have to convince in order to grow the game here.

Second, as we've seen Toronto's commitment to the Canadian game is questionable at best. During World Cup qualifying, Toronto's endless complaining about having to give up players to a national team like every other club in the world filled the sports pages. And during our continental championship, Toronto refused to give up a single key player, deigning to toss us the scraps of Kevin Harmse (who they were ten minutes from trading) and Ali Gerba (who had just signed and needed to play his way into shape).

Now, Toronto FC is a business. Maple Leaf Sports and Entertainment has a responsibility to its shareholders, not to Canadian football. Blaming a corporation for being selfish is overlooking every principle that makes our economy work, so I can't fault Toronto FC for their antipathy towards the national team. But when I'm cheering for the Canadian national team, I pretty much have to hope every Canadian national player of consequence avoids Toronto like Chris Cummins was just diagnosed with swine flu.

So, Julian De Guzman, since I bet you're reading this: signing with Toronto would be good for your pocketbook and it's always great to be playing at home. But it would be bad for you as a player and it would be bad for your country. Come get your big payday when you're old and grey and MLS is more your level, but for now, stick to Europe. I hear that La Liga paycheques aren't too bad anyway, and I'd much rather meet women from Cadiz than Scarborough.