Youth and Vigour vs. Old Age and Treachery

Share All sharing options for: Youth and Vigour vs. Old Age and Treachery 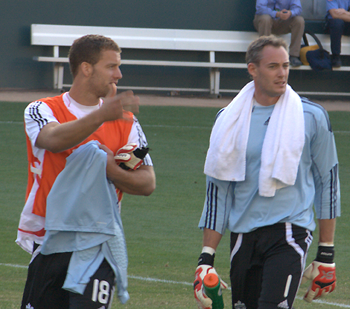 Did you listen to the excellent Stephen Hart post-game press conference at http://www.youtube.com/thevoyageurs? If not, you really should have. There were a number of great questions, including one about the somewhat surprising decision to start Greg Sutton over Josh Wagenaar on Friday.

Hart indicated that the coaching staff and he thought that Sutton would have an advantage against Jamaica's primarily aerial attack and skill on set pieces. Well, Sutton looked a little rusty but was quite good and earned his clean sheet, so we can't fault Hart's logic (in particular, Sutton was an assassin on corner kicks). I've criticized Hart in the past but he made the right moves on Friday and I'm getting more respect for him with every match.

I also got a good look at El Salvador when they took on Costa Rica. The Ticos know a thing or two about possession football but for the first hour El Salvador damned near ran them off the pitch. El Salvador had essentially a home crowd behind them but they also had bags of skill and showed it off at every opportunity. Like Canada they were sloppy at times, but unlike Canada they seemed a threat to score every time they got possession.

A few months ago I predicted El Salvador would be the minnows of Group A, but my god! If Canada had taken on El Salvador last night we'd be shoveling bits of Kevin McKenna off the grass. To stop an attack like that, you need a quick midfield (which Canada can have if they play like they should), a determined defense (which Canada has in trumps and showed off against Jamaica), and a spritely goalkeeper who can make the acrobatic reflex save, which Greg Sutton emphatically is not.

So which goalkeeper will start against El Salvador? In his press conference, Hart insisted that both goalkeepers trained well and he played Sutton for tactical reasons. Well, in Columbus tactical considerations will demand Wagenaar. A win will punch Canada's ticket to the quarterfinals and a draw will still leave them in control of their own destiny, so Tuesday will not be a day for complacency.

However, I bet that Hart will start Sutton. Stephen Hart can play favourites. Richard Hastings shouldn't get an international cap from anywhere but the CSA store at this stage in his career, yet he's on the team. Starting the aging and rapidly deteriorating McKenna without even giving the in-season and in-form Andre Hainault a look sent another signal. Hart is more resistant to habit than most managers (he has embraced Dejan Jakovic and Simeon Jackson almost immediately), but he's not immune. And when the goalkeeper you like has a solid game, as Sutton did, it becomes awfully easy to make excuses.

I don't think Sutton would do badly. But he wouldn't be the best choice, either.