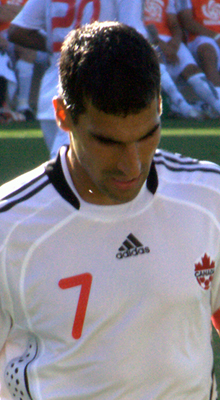 I am sitting in my hotel room with a cup of awful Complimentary In-Room Coffee beside me. My Canada shirt lies discarded on the table where I threw it just before I collapsed into the arms of Morpheus. I pretty much have to try and sum up last night, don't I?

It was awful. I got up at 4 AM in my apartment in Esquimalt and set off for the Victoria airport. My flight was early enough that I had to walk a long way since the buses weren't running yet. I flew in a cramped, unpleasant Dash 8-100 to Vancouver and then sat on the worst seat in the world for the flight to LA - a flight that was late enough for me to miss my bus that would get me to the Red Car Pub, where the Voyageurs were meeting pregame.

Since Voyageurs member superbrad had my ticket, I really had to get to that pub.

I wasn't doomed yet, though. If I hopped on the next available bus, I might just make it. Unfortunately that bus was also late, meaning I missed my connection and had to hike about four kilometers, through a city I've never been to, just in time to meet the other Voyageurs as they were standing, stretching, and paying the bill.

After all of that, it would take a lot for the game to be worth it. Luckily, it was.

The security at the Home Depot Center was abominable, and will serve for all time as a lesson in how not to run a soccer game, but the match itself was great, and not just because we won. Canada was playing a classic Canadian game, bending and flexing in all the wrong ways. With the exception of Will Johnson and later Josh Simpson, the midfield was poor all night, leading to a host of good Jamaican opportunities just hacked away by our backline or saved by Greg Sutton. Dejan Jakovic won himself a lot of fans last night: he was my man of the match and he was just invincible. At no point did Jamaica look like they were going to pull one over on that improbably brilliant 23-year-old MLS rookie. Paul Stalteri... well, by now we know what we get from him. He was in match shape, unlike in World Cup qualifying, and with his legs under him he was the old Diesel we all know and love. He was so far superior to Jamaica's strikeforce I almost felt bad for them.

McKenna struggled a bit at times but was generally reliable. Klukowski was his old, exceptional crossing self, but I thought he was a bit sloppy in his own half last night, with the Jamaican passes skinning him a couple of times for good opportunities.

But De Jong and Hutchinson, and to a lesser extent De Guzman, were invisible. It was ugly at times for them. The fact that we won anyway speaks volumes, and if nothing else it says once again that the boys play stronger as a team under Hart than they ever did under Mitchell. 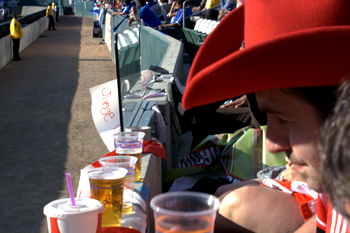 I must bring up the Home Depot Center security once more, though. Individually, many of the guards were pretty good. The guard standing in front of the Voyageurs section was a big, older fella with a great big smile, a sense of humour, and a good eye for when to step in. But despite having our banners cleared weeks in advance by the Canadian Soccer Association, the Voyageur carrying them into the stadium was detained for ages by security while they tried to find someone to check the duffel bag. Then, when he finally got them into the stadium having missed the beginning of the match, we had another altercation when we actually tried to put them up. I, personally, despite holding a letter from CONCACAF saying that my camera was permitted inside, got the runaround for about fifteen minutes and went to three different parts of the stadium before I got in.

And when we were all inside, set up, and ready to go great guns, we were told to sit down. Sit down? At a CONCACAF Gold Cup match? We weren't sitting in the $50 there-to-be-seen seats! We had to adapt on the fly to that. Couple new chants - "sit down, for the boys in red..."

Oh, and that same Voyageur who was detained with the banners? He got hassled by one guard with a stick up his ass, sent by the suits because he was blowing his whistle. As were about seventy other people, but strangely they were only worried about the Canadian.

So hooray for the game but if the Home Depot Center never hosts another CONCACAF event, they'll still have hosted one too many.