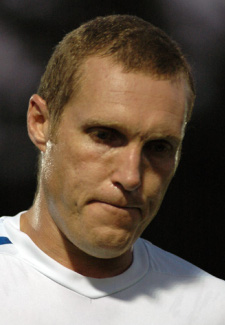 Lately, I've been giving a lot of thought to how we fall in love.

Oh, I'm don't mean the birds and the bees. I'm talking about the only sort of love that truly matters, the only love that can last through the aeons, that never lies and never sneaks around at night: the love that can only belong to something that really matters, like a sports team.

I'm the sort of guy who writes eulogies to the Edmonton Aviators and posts pictures of Rick Titus on his website, when Rick Titus is considered a biological weapon in seventeen Latin American countries. I held off, to the point of pride, on throwing my lot in with the Impact or the Whitecaps or the FC, even when I moved to Victoria or was surrounded by Toronto fans every time I went to any message board or was entirely abandoned by Impact fans who didn't attend a national match against Honduras (okay, my flirtation with Montreal ended early). I cheered for Vancouver in the Voyageurs Cup on an intellectual level: after all, underdogs are good (sorry, Toronto) and fanbases that don't abandon the Nats in World Cup qualifying are good (sorry, Montreal).

Then, earlier this year, Vancouver lost the Voyageurs Cup thanks to Montreal's impression of Craig Forrest, Frank Yallop, and Ipswich Town taking on a particularly feisty Manchester United. And I went off, and I ranted, and I raved, and I told people to die in a fire, and somewhere in there I realised that I wasn't exactly being intellectual about it. Dammit, I had started to care. Like a footballing version of a nineteenth-century courtesan, I had told myself the one thing I was never allowed to do was fall in love, and now here was my own personal romantic movie, starring Teitur Thordarson as Ewan McGregor.

There's probably an element of sheer masochism in it, mind. It is entirely in-character that I didn't bat an eyelash at the Whitecaps when they won the USL-1 title but was suddenly in their corner when they lost the Voyageurs Cup. Bear in mind that I also cheer for Charlton Athletic, an A-League team that hasn't existed for almost a decade, and of course Canada. I hope there's nothing revealing about my personality in there.

And yet, while with every day I live and die a little more with the Whitecaps fortunes (on Sunday I sang and chanted with five Southsiders at a Whitecaps Residency match when they took on the Victoria Highlanders, and nearly got involved in the worst rumble in footballing history for my trouble), sheer geography limits the extent to which I can be a true diehard or earn the right to wear that Southsiders scarf I bought. A Victoria Southsider I know pays $120 each way for a float plane to take him to and from Vancouver for most of the Whitecaps home games, but without disclosing the contents of my tax return let's just say I won't be doing that any time soon.

It's a peculiarity of the Canadian game that, while football was practically the seminal working-class sport in all the old footballing powers, here true enjoyment of the game is largely limited to the upper and middle classes. Except for those lucky souls living in Vancouver, Montreal, or Toronto, attending a high-level match in this country requires a considerable investment of both time and money, to say nothing of the cost of truly being a supporter.

Imagine being in Winnipeg, with your nearest Canadian team above the college level being the Premier Development League's Thunder Bay Chill. Or in Edmonton, where your home team would be in Abbotsford, British Columbia. Or the Atlantic, where unless you appreciate the semi-professional leagues that have been so successful in each province you're looking at a trip to Montreal for the professional game.

This is a large part of the reason I support the Canadian men's national team playing in as many cities as practical. Yes, the support in Toronto is superb, but if we play all our matches at BMO Field, what will the rest of the country do? Football is the canonical example of a sport that is better live than on television, and no number of 1080p broadcasts and imported British announcers on the allegedly Canadian Broadcasting Corporation will change that. There's a world of difference between a Calgarian seeing Toronto FC take on FC Real United or whatever and having a team to cheer for in his hometown, if only for a day.

The essential reason I still dwell on the Aviators after all these years is that they were my first love. Just like noone forgets their first real romance, no matter what happens there's a place in your heart for the club that introduced you to the joys of the beautiful game. I was lucky. I had an opportunity, even if it was only a brief one, in Edmonton. A kid growing up in Moose Jaw will be limited to only the pale shadow of the experience you get from watching Barcelona and Manchester United play for yet another European trophy, dimly knowing that something important to a lot of people is going on but also weighted down with the awareness that you can never, ever be a part of it.

If we want to live in a world where we get more than fifteen fans to a Canada match in the United States, we should make it a world in which most of this country can, without killing an entire weekend or half a paycheque, go to a high-level match and watch good players play the game the way it was meant to be. Don't talk to me about travel costs or players wanting to go overseas. It doesn't matter. If we're going to grow support for this game, experience is everything.