Share All sharing options for: For Me, Ze Gold Cup Is Over, Ja? 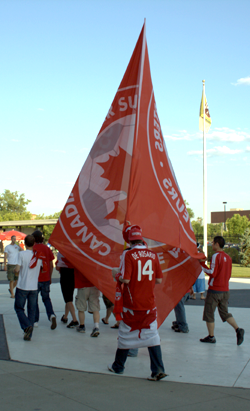 I'm calling it two and a half matches. Effort counts for half a point.

However many you want to say I attended, the point is that unless I find an envelope filled with hundred-dollar bills my role in the Gold Cup is over. I'm currently sitting in Vancouver International Airport, killing time until five in the morning when I can head down to the ferry terminal and make my way back home. Once I'm in Victoria I will, of course, catch Canada's remaining matches at the Bard and Banker downtown, but it won't be the same.

There were good times at the Gold Cup. In Los Angeles, I was up to spend $26 American on two beers (really) when a large group of El Salvadorans accosted me. Lacking any batteries or flares to throw, I had little choice but to relate to these fans as human beings.

Unfortunately, they didn't speak English and I don't speak Spanish. They were quite enthusiastic about my Canada kit, and we blathered at each other in mutual incomprehension until they hit upon the universal language.

I probably should have just got used to dealing with El Salvadorans, actually.

Another running trend was nobody having any idea that the Gold Cup was on. In Los Angeles, the cab driver that picked myself and another Voyageur up directly in front of the Home Depot Center wasn't aware the Gold Cup was on (apparently he just cruises downtown Carson at ten in the evening?). In Columbus, home of the Best Fans in MLS(tm), people looked at me like I was insane whenever I wore my Canada kit and reacted to the knowledge of international football in their community with shock. Only in Miami did I meet somebody with a hint of awareness: the shuttle driver who picked me up at the airport reacted with joy when he heard I was there for football. "Ah, Copa d'Oro!" he said - he actually spoke great English but for whatever reason it was the "Copa d'Oro" to him.

I mentioned that he was the first outsider who had any idea the tournament was going on. He replied that he was Colombian, so he had quite an attachment to the beautiful game.

Judging by the ill expression on his face, he remembered too.

Also, I spent a lot of time getting lost. In Los Angeles I held up my end of the navigational bargain but the Los Angeles county transit departments thought that schedules were a nice theory but unworkable in practice and did their own thing entirely, leaving me to walk about four and a half kilometers in the blazing California sun to just meet the Voyageurs in the pub.

In Columbus, I took a bus down to the pub but did the responsible thing and hitched a ride with some other Voyageurs to get to the game. Knowing that Crew Stadium was "north", we drove way the hell up the highway and were halfway to Cleveland before it occured to us to check a map. Also, one of the guys in the car was the guy who had to claim the tickets, so everybody else got to wait out in front until we showed up.

In Miami, well, you heard about that one already.

I met a lot of cool people, re-met a few more, and got stuck in a cab with a couple real dullards but I was drunk so that was okay. I did not get to lob a single bottle full of urine, which speaks volumes about the fans I encountered. The El Salvadorans were everywhere but they were interested in a good game and a good time, not in causing trouble. There were no Jamaicans to speak of and the Ticos I missed, which is a good thing since I would have gotten liquored up, yelled "REMEMBER SWANGARD!" and ended up with a Miami cop kneeling on my head. It was a much more positive experience than, to pick something at random, World Cup qualifying in Montreal.

I wrote a 1,200-word article on watching a USL-1 match, because I was bored and had no Internet access. If you stuck me in a hotel which charged $10 a day for Internet access and then let me out after a week, I'd have written a post about Charles Gbeke the length of War and Peace, except not proofread.

I sweated a lot. Los Angeles and Miami are so hot and humid that by the end of this tournament even Ali Gerba will be thin.

I didn't order room service once. I did, however, eat at Burger King three times.

Why did I do it? Because Canada won't play another meaningful match until 2011, that's why. So I figured, enjoy the good times while they last. I'd say I'd do it again, but next time I'll buy maps before I walk to the stadium.