When the Whites Came Crumbling Down

Share All sharing options for: When the Whites Came Crumbling Down 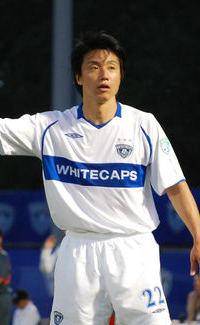 I am a Canadian football fan, so you'd think I'd be used to being the entire supporters section at a match. And sure, I've stood in crowds of twelve or fifteen before and felt like I was exactly where I belonged. But it's a bit different when you're the only fan in the building, like I was when I watched Miami FC take on the Vancouver Whitecaps at Florida International University Stadium last night.

(A subscript: yes, that is the same stadium where Canada took on Costa Rica on Friday in a match I did not manage to attend. Yes, I did walk to and from the stadium, just as I tried to on Friday. Yes, I did make it there and back without incident beyond sweating like Ali Gerba after a marathon. The system works!)

I was, of course, the only Whitecaps fan present. I was also damned near the only fan present full stop. There was a reasonable family crowd - a couple hundred or so - there to kick balls into the bouncy castle in the concourse (seriously) or cheer on the kids from a local youth academy who ran around before the game and at the half. There were also a few ultras (named, imaginatively, the Miami FC Ultras) who tried to chant and wave flags but had the look of people who weren't quite sure whether they were doing it correctly.

At intervals, the Ultras would be cheered on by the public address system. The announcer would bellow out the beginning of a chant, and the Ultras would half-heartedly pick it up and carry it for a few seconds before getting bored. They were such great chants, too - they busted out the old standard "this is our house", which didn't so much intimidate me as make me want a mortgage with the Bank of Montreal for some reason.

The real money shot was their rousing rendition of "When the Blues Go Marching In", the most generic of all football chants (and I say this as a man who enthusiastically leads the red version for Canada). Surely they could have just watched any match at Stamford Bridge on GolTV and picked up something but no, the public address man would yell "oh when the blues" and the crowd would yell back "oh when the blues" and a couple Ultras would pick it up "go marching in" and already the crowd would be losing steam when they replied "go marching in" and then all together "oh when the blues go marching in I want to be mumble mumble".

That was pretty much their entire songbook. I was disappointed that I didn't hear one "can you hear Vancouver sing?" because for once the answer would have been "nooooo": one fan doesn't sing, he yells.

I yelled a lot, though.

It was kinda funny at first. The attendance was in the mediocre three digits, so it was even easy to hear my applause when the Caps came out. I was standing at the front of the stand right near midfield - there wasn't a lot of competition for seats, and FIU Stadium is intimate enough that it was the best position I'd ever had in a game I wasn't playing in. The Vancouver starting lineup was announced, and I cheered along. The Whitecaps actually looked at me, which was another first, though you could have heard a mouse fart in that stadium. Most of them looked impressed. I cheered and felt stupid. Marcus Haber gave me a long-suffering, sympathetic grin.

I got the impression that a Whitecaps shirt was something not often seen in Miami. A photographer with a press pass gave me a good talking-to. He explained to me that he knew a lot of the players who came through here; for example, he and Charles Gbeke hung out from Gbeke's time with the Montreal Impact. He pronounced Gbeke's last name "G-becky" with a hard 'g'. He was also a Honduras fan and best friend of most of the players, especially Amado (or, as he called him, Armando) Guevara. I considered throwing him over the railing, but decided that if Vancouver won I'd need to save my fighting muscles.

(There were also a few very nice and knowledgeable Miami FC fans who came over and chatted. These fans were quite polite, good conversationalists, and pretty bad stories compared to that photographer guy.)

Luckily, there would be no rumble between myself and a bunch of Miami fans who would have lobbed bags of urine at me but had forgotten to fill the bags first and would frantically drop trou while yelling obscenities and hoping I'd wait around to get properly doused. From the opening whistle, Vancouver had no clear idea what they were doing. It was ugly.

The turf was a factor. You Toronto FC fans: if you watched a Miami FC match you'd stop complaining about the carpet at BMO Field forever. If Dwayne De Rosario had played on it, he'd give every board member at MLSE fellatio in thanks for the quality of his home stadium. The carpet appeared to have been laid by somebody who was laying FieldTurf for the first time, had only forty-five minutes to do the entire stadium, had gotten loaded at the campus pub before the job, and had also just been in a serious car accident. Crests and valleys rolled aross the pitch like the Scottish highlands. Balls took the weirdest damned caroms and ricocheted in directions I'd never even heard of. I think a Martin Nash cross actually bounced off the turf and travelled back in time.

Miami FC was smart enough to avoid long balls and long runs. They mostly played very direct passes, including piercing strikes of Vancouver's off-form defense. Their first goal came in much that way, with the Miami striker getting a clean break and beating Nolly easily. Their second came on a penalty for a hand ball: I howled and roared and questioned the referee's parentage but yeah, it was a hand ball. I hadn't even wiped away all my sweat and it was 2-0 Miami.

Vancouver never seemed to quite get the measure of things. Their long balls were invariably catastrophic. They repeatedly sent long bombs far out of the reach of the strike force, running harmlessly out the back or to a defender or, at best, pinning the Whitecap in the corner with nowhere to go. More than once a Whitecap tried to play the ball on the hop only to see it go someplace bizarre, a blunder Miami avoided. Most glaringly, Vancouver didn't learn from their mistakes and kept up the same strategy.

They had their chances. Hirano was a true midfield general and bossed both ends of the pitch. His playmaking led to some opportunities that invariably just went wide. The Caps snatched one back late but it was all over by then.

So ended my first experience as an away supporter for the Whitecaps. Not one Miami fan had the courtesy to heckle me on my way out. I felt more welcome at a Vancouver game in Miami than I did at a Canada game in Montreal. It was very nice, quite enjoyable aside from the result, and completely wrong. I can only assume that Miami FC will explode into flames sooner rather than later.