Why the CSL Isn't MLS Quite Yet

Share All sharing options for: Why the CSL Isn't MLS Quite Yet 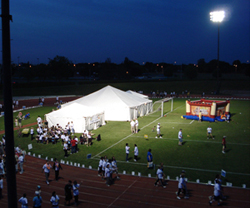 Enthusiastic observers of the Canadian game doubtless heard the surprising announcement from Canadian Soccer League commissioner Cary Kaplan last month regarding an ambitious plan of expansion, including a six-team western division and officially joining the Canadian Soccer Association with the long-term goal of getting a representative in the Voyageurs Cup. Kaplan went on It's Called Football and the FAN 590, getting more attention in a week than the CSL usually receives in a full season.

For those of us who support Canadian teams and Canadian leagues, it was good times, but it was left to Canadian football veteran Ben Knight to make the obvious observation: this was still the Canadian Soccer League. Proud fuckups of a near-monopoly on high-level soccer in Ontario that lasted decades until Toronto FC supplanted the undersupported Lynx. A league whose patriotism has always been lukewarm at best, running out its infamous International Division whose best team, the Serbian White Eagles, are the CSL's closest simulacrum of Manchester United but whose supporters defend their interest in Canadian football by saying that if Canada ever played Serbia, the support would be about fifty-fifty.

I have no problem with the International Division as it stands in today's CSL (an Ontario regional league with a USL-1 reserve side in Quebec), but it's incompatible with the idea of being a national football league.

That said, the International Division's involvement in the latest display of CSL ineptitude is entirely coincidental. The White Eagles were set to take on the Italia Shooters at Etobicoke's Centennial Stadium yesterday night. Hundreds of fans, thirty-one players, support staff, and stadium officials all showed up at the Stadium duly, and were duly informed that the game was called off, because the pitch wasn't ready.

Centennial Stadium was formerly a grass park but was changed to artificial turf over the spring. The City of Toronto dallied on getting the conversion started and the USL PDL's Toronto Lynx had already announced that a Sunday match was being moved to Barrie. Now, I can't speak for any of you, but if I were on the payroll of an allegedly national football league whose flagship team was holding its home opener at a recently refurbished stadium owned by an infamously dysfunctional city and the other tenant of that stadium had already rescheduled, I might try to nail down the state of that stadium. Instead, the CSL apparently responded to phone calls by just saying the game was on, got everybody to come out, and then sent them all home.

According to an e-mail from the White Eagles, "there was some miscommunication between the CSL and the City/Field. The artificial turf is down.. but not ready to play on as supposedly it not "tightened" properly." Kudos to their media guru for getting back to me within a couple hours on a Saturday (for reference, the inquiries e-mail for the Italia Shooters bounces) and I realise the club probably isn't privy to the conversation, but it's hard for me to imagine what sort of "miscommunication" we could be talking about.

CSL Guy: "So, will Centennial Stadium be ready on Friday?"
City of Toronto Guy: "Hell no!"
CSL Guy: "Fantastic!"

Of course, I don't walk the corridors of power in Canadian football, but wow. According to VPjr on the Voyageurs board, Centennial Stadium was visibly unready earlier in the week. If there was any uncertainty, the league couldn't have sent the night janitor out to see if the carpet had been laid?

But I'll tell you what, CSL. As soon as, say, the English Southern Isthmian League cancels a major fixture because nobody bothers to check if the stadium has a playing surface in it, I'll consider you guys as legitimate as a semi-professional non-League fourth division in a country that hasn't won the World Cup in four decades.

Edit (12:10 AM, June 8): apparently this post really irritated an anonymous White Eagles supporter, who has edited a number of his posts including the one I linked to above. I stand by everything I wrote, but please be advised that the posts you see today aren't as they were when this post was written. Guess I better watch out for tasers next time I'm in Belgrade...