Have You Ever Seen a One-Armed Man Punching at Nothing but the Breeze?

Share All sharing options for: Have You Ever Seen a One-Armed Man Punching at Nothing but the Breeze? 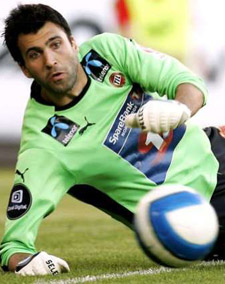 A sentence that hasn't been used much since about 1917: Fantastic news out of Romania! Via the Voyageurs, a few top-division Scandinavian sides are apparently interested (Romanian) in professional practice target and occasional hero of the men's national team Lars Hirschfeld.

Lars has been an obsession of mine for a number of years now. Early in his career I saw him a couple times with the Edmonton Drillers (the first indoor incarnation - you could write a masters' thesis on teams named "Edmonton Drillers") and I thought he was going to make Craig Forrest look like he should play for the Forest Green Rovers. Then he kicked around Europe like Moses wandering the desert, occasionally resurfacing to humiliate Chelsea in the Champions League, but in spite of incredible skill dropping out of decent clubs and starting jobs.

He went to CFR Cluj, and that was that. Some said that, in spite of his hefty transfer fee, the Romanian champions had decided that they'd prefer to run out a couple other idiots who, by all accounts, aren't actually that good. Some said that he had fled Romania secretly in the night, lying on a stone pedestal deep in the Austrian Alps, only to awaken in Canada's hour of need. But he made a credible appearance for us in Cyprus, and as if suddenly reminded of his existence the world is eager to buy and Cluj is eager to sell.

So thank god for Lars Hirschfeld. Judging by the rumours, his transfer might be made official sooner rather than later. He could well be with his new club by, say, early July, just in time to miss the Gold Cup so he could practice with his new squadmates and oh goddammit.

It gets better. Asmir Begovic, our second-best goalkeeper, whose girlfriend is expecting their first child, has effectively withdrawn himself from consideration while becoming eligible for the Bosnian national team again. Our third-best goalkeeper, Pat Onstad, is not only older than the hills but recently retired from international football. Goalkeeper number four is Greg Sutton, who is currently the backup on a mediocre MLS side behind a Swiss infant and when he finally played against Vancouver punched a ball so sweetly to Ansu Toure that even Chad Barrett could have scored the winning goal.

Picture it, if you will. Benito Archundia has called a penalty against Richard Hastings in the ninetieth minute in a quarter-final against Honduras. Amando Guevara is at the spot. The match is tied. Standing on the line for Canada is Kenny Stamatopoulos.

Okay, so you killed yourself. That's not going to help our readership any but it makes my point. Our number one could easily turn down the call, our numbers two and three basically already have, our number four has more rust than a Corvette after a light shower and nowhere near the performance, our number five is so bad the Norwegians say he stinks, and from there on we get into youth goalkeepers, goalkeepers in really low leagues (my god! that's Simon Rayner's music!), and Stephen Hart just biting the bullet and putting Dominic Imhof in goal.

I would murder a drifter to get Dani Fernandes back right now.

Don't get me wrong. Moving out of CFR Cluj would be best for both Lars and, in the long run, for Canada. Hirschfeld's still a young man and he will likely be around when the 2014 qualification cycle arrives. The more match practice he gets, the happier we'll all be when we play the most important games of all.

I'd just prefer that he waited until August to do it.