Can I Take A Few Minutes To Talk To You About Nutrilite?

Share All sharing options for: Can I Take A Few Minutes To Talk To You About Nutrilite? 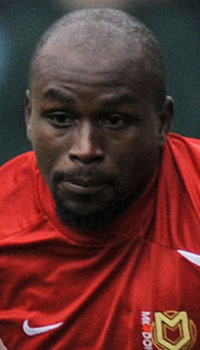 This is Ali Gerba, former striker for the Montreal Impact, Miami Fusion, Pittsburgh Riverhounds, Toronto Lynx, Montreal again, Toronto again, Montreal once more, GIF Sundsvall, IFK Göteborg, Odd Grenland, AC Horsens, FC Ingolstadt 04 and finally the Milton Keynes Dons, and future disappointment for Toronto FC. The hot rumour around town is that Gerba's signing with Toronto is imminent: on the order of the next twenty-four hours, and possibly in time to hit the pitch for tomorrow's Voyageurs Cup match against the Montreal Impact.

Gerba played with the Impact on three brief occasions earlier in his nomadic career, and depending on the state of his beer belly this may be quite the homecoming. Toronto will head into Stade Saputo tomorrow needing a four-goal win to take the Voyageurs Cup, and it's starting to look more and more like they'll get it. Joey Saputo's drinking buddy Marc Dos Santos has already announced that, with the Impact already eliminated, he'll be forfeiting any pride and self-respect he may have once had by fielding a sub-standard lineup.

Adam Braz, Cedric Jonquivel, Eduardo Sebrango, Zanzan, and Stefano Pesoli are all already confirmed to be out of the starting eleven due to nagging injury, personal reasons, or an international callup in Zanzan's case. The rumour mill says that these are not the only high-profile absences from the Montreal eleven, with Matt Jordan most glaringly expected to get a night off. Toronto, meanwhile, is rushing Jim Brennan back into action and, by all accounts, going for broke.

The key for Toronto is going to be whether the Montreal players are going to be as complacent as the Montreal management. Your average professional athlete takes pride in going for a result and in playing the game the right way (unless he's Amado Guevara or Chris Morgan), and nobody wants to get worked over like they owe Chris Cummins money and lose four goals. I think even the most raving, hysterical critics of the USL-1 would acknowledge that it's not usually four goals a game worse than a mediocre MLS side and, certainly, in the history of the Voyageurs Cup Toronto has never looked anything like they were going to win by that much.

So, having hedged my bets so thoroughly, I should come right out and say that I think Toronto's going to do it.

Montreal is heavily undermanned, particularly in defense, and has nothing to play for except pride (their manager has announced he plans to forfeit even that). Toronto is getting healthier every match, has been gritting out some nice results lately, may add a superb finishing striker who could be good for twenty minutes of taking through balls and placing them perfectly, and has already demonstrated a laughable superiority over the Impact in their previous match. With Montreal's missing players, Toronto has a marked superiority in every area of the game.

4-0? It could happen. I hope some of the Toronto fans are at least checking prices for flights to Puerto Rico.