Share All sharing options for: Spotlight On: Asmir Begovic 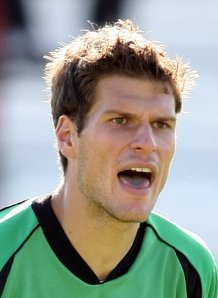 Asmir Begovic is a goalkeeper for the Portsmouth reserve team. He has never played a senior match for the Premier League club. Most of his senior experience came last season with Yeovil Town of League One, where he took the starting role from fellow Canuck Josh Wagenaar and was, at best, pretty good on a lousy side. He's twenty-one years old, and he's the great Canadian goalkeeping hope.

So we have problems.

Begovic is a legitimate prospect and Pompey take him seriously. He's the third-choice keeper on their depth chart behind England starter-cum-iron man David James and the more experienced Jamie Ashdown, and has seen a few games from the substitute's bench this season. Portsmouth's been careful to keep him in match shape, giving him matches with their reserve team as well as his big loan to Yeovil Town this year and a shorter but still significant stint with League Two Bournemouth in 2007. In July of last year he was given a three-year contract extension, and Premier League clubs don't dish those out to just anyone. At the U-20 World Cup in Canada, he was about the only Canadian player to come out of the tournament looking better than he did going in.

There's an awful lot to like about Begovic. He is an titan in goal but is incredibly agile for all that. His frame recalls a basketball player rather than a footballer, big and lean rather than squat and powerful, but as we saw in the U-20s he can move like a cat. His reflexes are magnificent and when he's in his late twenties, barring injury, I think we all expect him to be a star: probably the first Canadian starting goalkeeper in the Premier League since Craig Forrest.

The goalkeeping situation has been getting some attention in the last week, with reports that Lars Hirschfeld is finally on the outs in Romania (in Romanian). Most of us can live with Hirschfeld and Onstad in the short term, even if the thought terrifies us. In the long term, Begovic and the promising Adam Street at West Ham both look like the real deal. Our problem is that we have nobody in the medium term, nobody who we can rely on in 2012 and 2013 when we take our next crack at World Cup qualifying. Begovic will be only twenty-five, or six months old in goalkeeper years.

What we need is someone to take the reins between the decline of Hirschfeld and Onstad and the rise of Begovic and Street, but our only guys in that age bracket are Kenny Stamatopoulos, Josh Wagenaar, Hirschfeld, and by the most generous possible interpretation Greg Sutton, all of whom are currently backups for lower-league clubs. Wagenaar's got plenty of learning to do yet but he doesn't look like much so far, whereas Stamatopoulos has a well-established record of mediocrity and Greg Sutton clearly is what we thought he was. Lars, for all his technical prowess, needs to get a ride on a first team somewhere before he's even in the conversation.

Come 2012, when the next qualification cycle begins, odds are that it'll be some combination of Hirschfeld, Begovic, Wagenaar, and Stamatopoulos. Asmir is the only guy on that last whose career is trending up rather than down. Which makes him, as far as Canadian football fans are concerned, a rival with David Hoilett for the position of most important man the world. And in the not-terribly-unlikely event that he is pushed into a role with the national team sooner than his age would normally allow, he will have to prove to be as strong as we all hope he is.