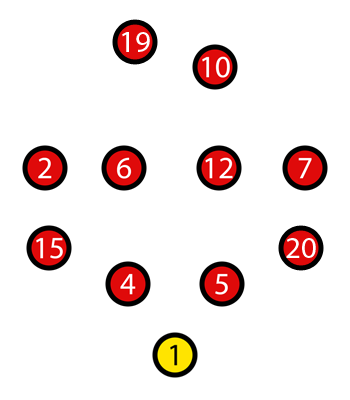 Like probably every other preview you're going to read for this friendly, I'm going to come right out and say it: I want the veterans to play.

My preferred lineup is on the left, and if there's anything in there that's really going to surprise I don't see it. Yes, I do have Finnish third-division striker and national team rookie Tossaint Ricketts in the hole, but who the hell else are you going to use from this lineup? Ornoch? God help us, McKenna?

Probably the biggest departure I'm making from orthodoxy is having Jamie Peters at fullback and Paul Stalteri at midfield. But, at the international level, Diesel has always been at his best on the wing. I have no idea why this is true but it is and has been for years: Stalteri simply gets into the game much more easily when he has more control over the play, and that's what he gets at midfield. Even in the recent World Cup qualifying, Stalteri alternated between uninspiring and lethargic until Mitchell cut him lose to go further forward in the Mexico match, when he was Canada's third-best player behind Radzinski and Klukowski.

Peters at fullback, meanwhile, is simply because that's where he's been playing lately with Ipswich Town. I really like the idea of Peters as a defender. He's pacey, he's better on the ball than our current backline except Klukowski and McKenna, he's really the best young option we have on the flank, and our midfield is stacked with talent for the next decade or so. This would be his first minute of national team action at fullback and I'd embrace the opportunity.

Honestly, I don't expect Stephen Hart to agree with me, and I wouldn't be surprised to see Stalteri and Peters switched in the real lineup. But I do expect to see Nik Ledgerwood and Simeon Jackson start, and I'm excited for that too. Ledgerwood would be making his second appearance and his first in over a year and a half for the national team. It's so easy to forget that Nikolas is already 24 years old: he's seemingly been a top prospect forever. He's small, pacey, and reliable in the inimitable fashion of the German-trained midfielder. Mostly on the fringes of 2.Bundesliga side TSV 1860 München, Ledgerwood's career has been right on the development curve, and this is a good chance for him to prove he deserves more international experience.

Simeon Jackson, of course, needs no introduction. His goal to put Gillingham back into League One (with the assist to Charlton prospect Josh Wright) is already the stuff of legend, and for a twenty-two year-old his resume is positively starstudded. Amazingly, this will be his first appearance for Canada (and he will appear: he made the trip to Jamaica with the nats at the end of World Cup qualifying but Dale Mitchell did not put him on), but it certainly won't be his last. Jackson is already the quickest striker Canada has had since Radzinski in his prime and has that touch around the goal that you can't teach. His minuses are size and big-game experience, and the latter is looking better by the moment. I'd play him ninety minutes against Cyprus, and honestly I might play him ninety minutes for every game until Paul Stalteri is accepting the Gold Cup at Giants Stadium.

My pick for Jackson's fellow striker is Tossaint Ricketts. Ricketts is the reverse of Jackson in many ways: his club career has been both short and indistinguished but he's got it done with les rouges at the youth level. Only six Canadians have ever scored hat tricks in international play and Ricketts is one of them, bagging his in a U-20 friendly against the Americans of all sides. Ricketts reminds me of a young Ali Gerba: not fast but a good final burst, almost no moves but the ones he has he can perform reliably, and if you make a mistake against him he's going to punish you for it.

Being a friendly, there should be plenty of action off the bench. Kenny Stamatopoulos should only get up in case of injury: he's not the answer to any of our problems and we need to get Hirschfeld as much match experience as possible. Richard Hastings was a great fullback for a long time but has hit the wall, fallen onto the reserve squad of a mediocre Scottish Premier League team, and all his arrows are pointing down rather than up. I wouldn't bring him in either. The rest are fair game.

Yes, that includes our favourite pair of no-names, Dominic Imhof and Eddy Sidra. Sidra turned twenty at the end of February and is by far the youngest member of the team. A fullback in the Energie Cottbus youth setup (home of fellow Canuck and first team why-the-hell-didn't-you-call-him-up all-star keeper Adam Straith), Sidra has never impressed in the U-20 setup and lacks much to recommend him: he is small for his position, not particularly quick, and hasn't got enough experience for this level of competition. But he is in a very well-respected training program in Germany, has put in good performances in the past, and perhaps most importantly to Stephen Hart he was born in the Sudan and retains full eligibility for their national team. Has he heard whispers of the Sudanese trying to cut Canada out of the loop? Perhaps this is just a case of better safe than sorry. At any rate, you bring a twenty year-old into Cyprus for a friendly, you may as well play the kid and see what he's got.

Dominic Imhof I've gone on about at length, so there's no need to rehash my earlier ranting. Suffice to say that I don't think he has what it takes. But our backline isn't at its best with this selection, so I'd consider bringing him in for McKenna and seeing what he can do. Imhof is known for offense, and if we're down late he might be an interesting choice when we're pushing the back line forward.

So, A Prediction Maybe?

I've got Cyprus taking this one 2-1, Canada's lone goal coming from Simeon Jackson.

Cyprus is better than most of us think. They're a small, poor, famously divided country not known for their sporting heritage. Most of their players are domestic and in a league that nobody rates. But you put them out on a pitch and they get results. Canada faces a few teams like that in CONCACAF, with El Salvador the most topical example. Cyprus would be a realistic opponent for a Canadian A-team, and against this bunch I can't picture the Canadians snatching the result.

There's too many question marks in this lineup. Too many players without either ability or experience. Lars Hirschfeld hasn't played a millisecond of competitive football since World Cup qualifying, and Kenny Stamatopoulos is just dreadful. But I hope to be proven wrong!

Canada takes on Cyprus, in Cyprus, at 1 PM Eastern time.

Edit (1:05 AM PST): According to an e-mail from Richard Scott at the CSA, "there will be updates on our website before, during and after the match." Since there was a reply to my question about whether there was any Cypriot broadcasting, the Cyprus football federation website mentions no broadcasting, and nobody can dig anything up on the Voyageurs board, I think it's safe to say that our options are either "stay glued to canadasoccer.com" or "fly to Cyprus".