Share All sharing options for: Wait, There's a Dominic Imhof?!? 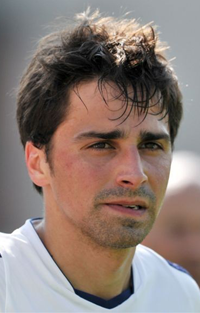 I consider myself a pretty big fan of Canadian football. I like to think that I know a thing or two about the guys who don the Maple Leaf. I could pick Andrea Lombardo out on the street (and I could pick him out if he was on Adam Street, but that's really none of my business). I can tell the Hoilett brothers apart, and I'm not sure their mother can do that. I even recognized Dale Mitchell when he was making me a smoothie at the Mayfair Mall Orange Julius.

So take it for what it's worth when I say who the hell is Dominic Imhof?

The latest callup for our friendly Saturday against Cyprus, Imhof is the brother of 1.Bundesliga star midfielder Daniel Imhof, which appears to be his main qualification for the men's national team. He's also a fullback and possibly the best player for FC Tuggen, a team in the Swiss third division. There's a Swiss third division? And we're pulling players out of it to prepare for the Gold Cup? Did we suddenly become Moldova when I wasn't looking?

While I'm all for developing promising young talent in a friendly, Imhof is twenty-seven years old. How many twenty-seven-year-old Swiss third division defenders do you know that went on to become the next Franz Beckenbauer. A few sites around the Internet suggest that Imhof also holds Swiss citizenship, but did we really worry about having to cap-tie him? What's next, calling up the long-lost De Guzman brother and 39-year-old Scarborough pipefitter Ted De Guzman? Asking Bob Lenarduzzi to tug on a jersey and a mullet wig and come for another runout? Call up Kenny Stamatopoulos? Oh, Christ, they did that too?

Now, we knew this was going to be a pain in the ass of a friendly to get players for. It doesn't fall on a FIFA-approved friendly date and clubs were always going to be reluctant to let players go. Promising youngsters like David Edgar and Asmir Begovic were question marks as Edgar tries to find a new ride with his contract expiring and Begovic tries to crack a Premier League roster for next season. Skilled veterans like Tomasz Radzinski and the Imhof we all thought was getting called up often had other commitments and, frankly, better things to do than run out against Cyprus. Injuries were knocking out our share, with Gerba, Friend, David Hoilett, and others on the limp. Frankly, I'm amazed we got as many names as we did - Stalteri, De Guzman, and McKenna are all making the trip, among others.

And there's a few good kids out there. I'm pumped up to see Nik Ledgerwood. Calling Tyler Hemming across the ocean from the USL-1 seems bizarre but he's a good young player. Issey Nakajima-Ferran and Jaime Peters were both overdue to make their returns to the national team. But first Stamatopoulos and Tossaint RIcketts, and now this? Are there really no other Canucks left? If I was some random Canadian playing in the Icelandic ninth junior reserve division and Stephen Hart didn't at least call me I'd be pretty pissed off right now!