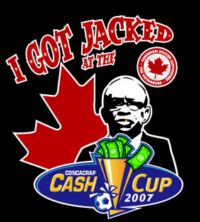 On Thursday, we finally got the draw for the 2009 CONCACAF Gold Cup, taking place this July in pretty well the entire continental United States (for 2011, Jack Warner is supposedly trying to schedule a date on Jupiter).

Well, when I say "draw", I overstate the case somewhat.

"We’re excited at having created these groups. They are well-balanced and will provide very interesting matches," CONCACAF general secretary Chuck Blazer said. "Given the variety of teams and the cities we’re going to, it offers something for everyone." (Canwest News Service)

In what I'm sure is unrelated news, the Americans and Mexicans have cotton-candy hugs-and-kisses draws whereas Canada is drawn against Costa Rica, Jamaica, and El Salvador. You can make an argument that three of the six strongest sides in CONCACAF are in one group but, hey, at least those honest souls at CONCACAF think the matches will be "very interesting".

Canada will travel a combined distance, stadium to stadium, of 4,787.67 kilometres during the group stage according to Google Earth, from the west coast of the United States in Los Angeles to the southeastern tip in Miami, passing through almost the geographical centre of the country in Columbus en route. Their opponents in the group will suffer the same trials, but it's almost like they wanted to soften up Group A so that the United States and Mexico wouldn't have any trouble...no, what an absurd concept.

We're in the Group of Death, but there is opportunity here. Canada was the better team when we played Jamaica at BMO Field during World Cup qualifying and drew only due to a single Pat Onstad gaffe. El Salvador are far and away the weak sisters of the group, so that means that whether we can beat the Ticos in Miami is largely a matter of pride and a favourable quarterfinal draw.

I'm not going to lie to you. I think we can make it.

Costa Rica's the class of the group, obviously. They're the role models for having a strong domestic league. Their roster consists of the occasional foreign star, such as Carlos Hernández of the Los Angeles Galaxy, but they're padded with a bunch of guys you've never heard of from the Costa Rican league. C.D. Deportivo Saprissa contributed four players for their last match against Mexico, including their most-capped player and top scorer, midfielder Walter Centeno. When was the last time you saw a C.D. Deportivo Saprissa match?

But the Ticos keep doing it. They've qualified three times for the World Cup, including twice consecutively, and they're favourites to make it three in a row. My god. It's almost like having domestic and near-domestic players who can play with and against each other on a regular basis leads to having a superior team. Which is why I've always felt that you should cheer for every Canadian club except when they're playing against your own side. If we can get three MLS entries by 2012, that's a total of fifteen Canadians required to be on MLS rosters plus those who succeed on their own merits around the league.

Be like Costa Rica, is what I'm saying. Considering how easy travel is when you don't need to recall players from aroudn the globe I'd be stunned if they didn't send their best team to the Gold Cup, and that means they can book a trip to either Philadelphia or Dallas in pen. We play Costa Rica July 10 in Miami, our last match of the group stage. Later that night Jamaica plays El Salvador, and since we can probably predict how both of those matches will turn out without even seeing the rosters, let's cross our fingers that we're qualified before kickoff.

Jamaica's more-or-less in Canada's boat. They were kicked out of World Cup qualifying in inglorious fashion and they're playing their first match of 2009 with a different manager than the one who managed the beginning of 2008. They're going to be burning for a big Gold Cup, and they're going to look at their strong group as nothing less than an appropriate challenge. They're probably going to combine young players (hopefully not Dave Hoilett!) and veterans to prepare for 2014.

Yes, they beat the hell out of us in Kingston in our last match, but by then Canada was out and playing nobodies (remember the Kevin Harmse Experience, everybody?) while Jamaica still had everything to play for. And we could easily have reversed the scoreline in Toronto, but Ricketts was solid and Onstad, er, wasn't. Well, you can bet that the Reggae Boyz won't have old man Onstad around to help them out this time.

We open our tournament in Los Angeles against Jamaica on July 3. There's a fairly strong contingent of western Voyageurs already committed to this match, so hopefully the boys can get us off on the right foot. Canada - Jamaica will clearly be the vital match of the group: with Costa Rica nearly certain for qualification and El Salvador so far below our calibre, it's almost certain that the winner of that match will go through.

El Salvador is the "and the rest!" of Group A. They've made it to two World Cups (though none since 1982) and they're a very credible team capable of shocking anybody in CONCACAF if they play their best match. Essentially the entire El Salvador squad plays in their premier league, so they're as familiar with each other as it's possible to be. They're a legitimate footballing nation with pedigree up the rear and they're stunning in World Cup qualifying, getting through to the hex, achieving a 2-2 draw at home to the United States, and showing magnificent style losing 1-0 in Costa Rica. But they're just not that good, their players are of strictly local calibre, and they've somehow contrived to be lower in the FIFA rankings than Canada is. In the previous World Cup qualifying round, El Salvador's Group 3 was laughably bad, boasting minnows Haiti and Suriname along with Costa Rica.

But I'm not looking past them. We play El Salvador July 7 at Crew Stadium in Columbus (plenty of Toronto Voyageurs signing up for a bus trip, which should be fun) and I'm terrified. You can bet that Columbus football fans won't have fond memories of Toronto FC and might well be in El Salvador's corner. When the schedule came out, I circled July 7 as "The Sort of Game Canada Loses". If we play our best match we will win barring intervention from the football gods.

God, I hope we play our best match.