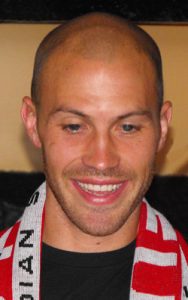 Congratulations are due to Lars Hirschfeld on achieving a remarkable milestone earlier this week. Unfortunately we missed it at the time, but better late than never: April 6 was the one-year anniversary of Lars's last appearance for his club, CFR Cluj of Romania.

It all looked so promising at the outset. Cluj paid €1.3 million to lure the signature of Hirschfeld from Rosenborg B.K., powerhouses of the Norwegian leagues, during the January 2008 transfer window. Saying Cluj is the best team in Romania would be like saying that Diego Maradona in his prime would be the best player for a PDL team: true but significantly understating matters.

Unfortunately, being a strong team, CFR Cluj has some strong goalkeepers. Portugese keeper Nuno Claro has been with the club since 2007, while domestic talent Eduard Stăncioiu joined in 2006. Still, €1.3 million is a large transfer fee in anyone's books, and if an Eastern European team that's not exactly rolling in revenue were to spend that much on a player, you'd think that they'd, I dunno, put him in more than five matches over almost eighteen months of continuous employment.

Lars Hirschfeld is good. Canada fans have wildly varying opinions of his talent but for my money he's the best keeper this country has produced since Craig Forrest. Starting in World Cup qualifying after Pat Onstad laid an egg at BMO Field, Hirschfeld was always reliable, sometimes spectacular, let in one particularly hideous goal at San Pedro Sula and had that whistled back on offsides. But Hirschfeld's club career has been nightmarish since leaving the Calgary Storm of the A-League in 2002. Joining up with Tottenham, Hirschfeld went on a loanee's tour of Luton Town, Gillingham, and Dundee United, playing a total of nine matches over three years. A free transfer to Leicester City produced one more game, and another free transfer to Norway's Tromsø I.L. led to eleven appearances in 2005 and, finally, some notice.

When he moved to Rosenborg to begin the 2006 season, things finally seemed to come together for Hirschfeld as he played in fifty-two matches for Norway's finest side. Then, one ill-advised transfer to Romania, and it all comes smashing down.

God, I hope Adam Street comes along in a hurry.