Share All sharing options for: Laying with Atiba Hutchinson

Last night, laying in bed, I spent another couple hours with Atiba Hutchinson. 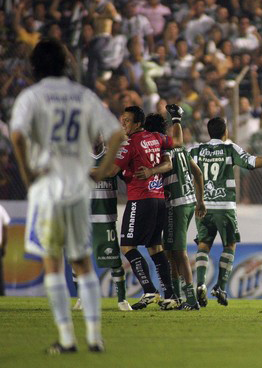 It's not the real, physical Atiba Hutchinson, of course - if I were actually in bed with him this blog post would be much more interesting. It was more a phantom of a memory from 2007, Canada and the United States, CONCACAF Gold Cup semifinal. The United States was up 2-0 before Iain Hume came in and put on the show of a lifetime, scoring one goal and saving another. 2-1 United States, stoppage time in the second half. Maxime Bernier catches the ball in the centre of the pitch about thirty feet back and plays it through. It's a bad pass - right to the feet of an American defender. But the American bobbles it and Atiba Hutchinson is there. He's calm, cool, and collected, slotting the tying goal home, and he only shows any trace of emotion once the ball is safe in the net.

And then Mexican referee Benito Archundia comes over and politely explains to Atiba that, in spite of all appearances, the game being played tonight was not soccer, but in fact a sport called Canada Always Loses.

Very popular in Trinidad and Tobago, I understand.

A couple shades from 2004 paid me a visit, too. Canada went into Guatemala needing a win to get to the third stage of World Cup qualifying. Canada lost 1-0 as Guatemala was awarded a bogus penalty on one side and Canada was denied a legitimate complaint on the other. Who was the referee for that one again? Oh, that's right.

A few more recent faces show up. Pat Onstad and Paul Stalteri in 2008, for example. Onstad allowed a shameful tying goal to the Jamaicans at BMO Field, while Stalteri rang the would-be winning goal against Mexico off the crossbar in Edmonton. But Canada drew both those matches and, really, the Mexican result was great anyway, so they don't stay long.

They show up a lot on nights like this.

I'd just witnessed the Montréal Impact putting in what would, in any other context, be a disgraceful second half against Santos Laguna. They got through one hundred and thirty-five minutes up 4-1 on aggregate and two away goals to zero, with the best goalkeeper in the United States League, Division One to see them the rest of the way. They ended up dropping it 5-4 on two goals in stoppage time, and that was all she wrote.

God, I would not like to be an Ultra on a night like that. I was rooting hard for Montréal but that was because I'm a Canada fan. If it were Vancouver or Toronto FC in that match I'd be cheering for them just as energetically.

And, because I'm a Canada fan, I spent pretty well the entire match waiting for the other shoe to drop. When Brown and Sebrango scored I admit that I got my hopes up, but deep down inside I knew better. When the second half began and Santos Laguna rampaged around the Impact goal, well..

The consolation is that the better team won. Santos Laguna played a good match in Montréal and were a bit unlucky to lose 2-0, and at home their supremacy was rewarded. When after the ninetieth minute Felix Brillant bodyslammed a Laguna midfielder in the area with no foul, it cast away the last shadow of a doubt that the Impact did not deserve a win. The soccer gods called a fair game last night, and if in their sadism they tore Montréal's heart out, at least we weren't wronged by fate.

Still. To play one hundred and eighty minutes of winning football and to lose in stoppage time, heartbreakingly, with a two-goal advantage in the biggest match a Canadian club has ever played.

Is it any consolation that this match, once again, shows the ridiculousness of the American soccer season? The Impact had played one competitive match all year before last night, and it was the previous week's home tie. All credit to John Limniatis for arranging a tour of good Italian teams, and all praise to Joey Saputo for bankrolling the trip, but friendlies are never enough. Santos Laguna were in the middle of their season and, for the most part, in peak form, but the Impact didn't have it together yet. In the second half, with Santos Laguna moving the ball at will and penetrating Montréal's defense with trivial ease, that lack of conditioning proved fatal.

God. I could go on about the American leagues all day. And I did, laying back last night, ranting mentally to the ghosts of past Canadian soccer failures. After a few of these stomach-punching defeats, the shock gives way to a sort of pained numbness, like when the anaesthetic starts to wear off after having a tooth pulled. The anger, though, never goes away. I haven't been a Canadian fan that long, but I've seen enough long-time followers to know that much.

That's the sort of night it was. A night to dwell on everything negative, a night to dwell on our countless failures as a soccer-playing nation and to harp on about the brain-numbing ignorance of those trying to grow the sport. Soon, it'll be time to celebrate what the Impact did, the class they showed, and they way they proved themselves worthy of the Voyageurs Cup by carrying it against the best on the continent and showing what Canadians are made of.