Goodbye to the Greatest Striker We've Ever Had

Share All sharing options for: Goodbye to the Greatest Striker We've Ever Had 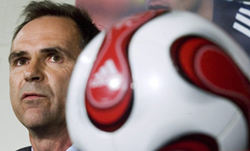 I haven't posted in ten days. An unfortunate combination of illness and panic at work has felled me. But I would be even more remiss in my duties than usual if I failed to mention this.

Dale Mitchell has taken the pipe. He's gone. Our long national nightmare is over.

There's been speculation about the direction Canada will go in the post-Mitchell era. In my post below, I speculated on Mitchell assuming some of Hart's responsibilities as technical director, as had been rumoured at the time. Turns out that Mitchell's just gone, and Hart will probably have to go on as technical director. Which means either we bump up someone else to take Hart's spot and move Hart back into management, or we just bump somebody up to take Mitchell's spot.

The hot rumour for interim manager? Tony Fonseca, and good god almighty I wish I were making that up.

For those who weren't following the CONCACAF U-20 tournament, Fonseca led Canada to a disappointing single win, dropping a couple winnable matches to Costa Rica and the hosts Trinidad and Tobago. By all accounts the boys didn't play badly and noone was under the impression that this was a crop of top-flight youngsters ready for prime time. But there's a natural concern about succeeding Mitchell with another guy whose team so recently bombed out at a lower level.

Whoever takes over is probably going to be in Stephen Hart's role all over again, carrying an interim title into the Gold Cup while the CSA searches for a more permanent replacement. I truly understand economising and taking whoever's available while you try and find a long-term solution, but honestly? I'd have been happier riding Mitchell into the Gold Cup and replacing him directly with a proper long-term manager rather than pulling the trigger on him a few months before a major tournament and relying on the good fortune of some CSA lifers to keep us from humiliation.

Plus, with the "Fire Mitchell!" chant out of our repetoire, we're going to have to work on something new for the Gold Cup.

Edit (6:31 PM Pacific): over at the 24th Minute, Andrew Bucholtz suggests that I probably regret my earlier decision to trust the CSA more than I trusted Duane Rollins. Regret? Yes, I look like an idiot, but Dale Mitchell is cashing EI cheques. There's a tradeoff I'll take every day. Besides, frankly, I always look a bit like an idiot anyway.