Share All sharing options for: Irish Eyes are Smiling

The Republic of Ireland is a mid-sized industrial nation. They have a population of about four and a half million and a population with a lot of interest in a lot of sports. They have a domestic football league but a minor one that hasn't produced a single soul on their national team. They're also ranked 26th in the world and have qualified for the World Cup in 1990, 1994, and 2002.

I guess what I'm saying is, what the hell?

Like Canada, Ireland's football world is dominated by its larger neighbour and its best players play in foreign leagues. Gaelic football accounts for a third of every spectator in the country at sporting events, and association football doesn't crack the top two for either attendance or participation. Unlike Canada, they play in the best division in the world against strong teams and, unlike Canada, they've been successful at it. 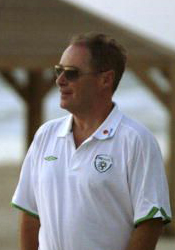 The trick is to figure out what the differences are. Ireland's had better management, with longtime bosses Eoin Hand, Jack Charlton, Mick McCarthy and Brian Kerr running the team between 1980 and 2005. But they haven't been afraid to pull the trigger on anyone who's lost the team and Kerr, the successful junior manager who moulded an entire generation of Irish youngsters, was axed after a failed qualifying campaign for 2006.

Some federations don't approve of the idea of hiring good managers and then letting them go once they've worn out their welcome, but the Irish isn't like most federations. It's imperfect, occasionally corrupt, and has a closet packed to the brim with skeletons, but it's dedicated to advancing the top levels of the game and they've never been afraid to shake things up.

Before the 2002 World Cup, Mick McCarthy and the Irish team was training on the Northern Mariana island of Saipan. It was a shambles. The FAI (stop me if this sounds familiar) had chosen their own perks over the success of the national team. They'd stuck the players in business class the executives had flown first class all the way. Training materials were substandard and arrived late, and the venue was utterly unsuitable for a professional squad preparing for the tournament of a lifetime. Ireland captain Roy Keane absolutely lost his mind, teeing off on Kerr, the Football Association of Ireland, and basically everybody who looked at him funny before going back home and skipping the tournament.

If that had happened in Canada, it would have been more of the same. In fact, judging by Julian De Guzman's anger it very nearly did happen in Canada and the CSA seems content to snooze through it. The FAI did something about it. The team's been less successful in recent years, partially thanks to bad play and partially thanks to bad luck. But, unlike Canada, they've always managed to be in the thick of things. They even managed to resolve the nightmare that was their national league structure in 2005, enduring some short-term pain to put together a proper national league.

Ireland has every reason in the world not to be a success. But they are, because even though they're a bunch of corrupt amateurs who sold off World Cup tickets in the mid-90s Jack Warner style, they also put the football team first.

Think about that when you go out on St. Patrick's Day. So far we mostly know them for drinking, but maybe we should learn their lessons from football instead.