The Mitchell Succession: The Candidates

Share All sharing options for: The Mitchell Succession: The Candidates

First off, let me make it perfectly clear. I don't think Dale Mitchell is going anywhere. Since Mr. Rollins's report from the weekend, CSA media rep Richard Scott responded to the allegations via e-mail about as unambiguously as it's possible to, saying:

Dale is our men's head coach - so that includes friendly in May vs Cyprus, other friendlies/training camps that are always part of planning process, plus upcoming CONCACAF Gold Cup for which we have just learned venues (draw yet TBA).

That's up there on the "I did not have sex with this woman" scale of denials. Check out the Voyageurs thread for some analysis from the gallery, but the CSA has no reason to lie about that. If the board is so torn that a move has to be kept secret, what chance does a management change have of getting through anyway?

There is a CSA board meeting over the weekend, so if Mitchell's going to take the pipe, this is the time. But so far it's the word of an anonymous source against an official statement from the Canadian Soccer Association.

I understand why the CSA's been backing Mitchell so hard. 2007 was the most chaotic year in the Association's history, with the demise of Kevan Pipe, the brief flicker that was Colin Linford, and the transition between Yallop, Hart, and Mitchell on the senior team. Chaos is bad for a football team, particularly chaos right before a World Cup qualifying campaign. Putting a bullet in Mitchell's head in 2008 would have sent the signal that the CSA still didn't have their ducks in a row, and nobody wants to do that.

Secondly, who is the CSA going to put in charge? The Association is even more short on cash than usual since to the 2007 management debacle and the Under-20 World Cup which the Association somehow managed to lose $1.7 million on despite hosting the most successful tournament in history, and they're not going to dream of paying a major world football manager as well as the rest of Dale Mitchell's contract (running through 2010). 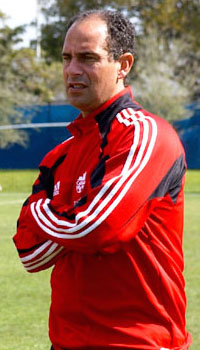 For financial reasons, Stephen Hart is the only plausible candidate. He's also the least qualified, and his reputation rides entirely on the 2007 Gold Cup where Canada lost, unjustly, to the United States in the semi-final. That's the extent of his management experience in senior football. He's done quite a bit for the national team in the youth ranks, managing the U-17 team from 2001 to 2007. But when he was put in charge of the senior team for the Gold Cup, it was a massive surprise. When he did well, it went way against the grain.

Stephen Hart's main job qualification is that he's not Dale Mitchell, which is important. Dale Mitchell doesn't have the respect of his players, and when half your team criticises you in the media and not one core guy steps forward to defend you, that's serious. In spite of Hart's success, the manager had been chosen and the Association would never, ever dream of going back on its word on management.

It looks like a mistake. But that was a dysfunctional qualifying campaign by any standard, and management was only one factor. If the CSA had stuck with Hart we could be talking about Hart's replacement today, while Mitchell sits on Sportsnet as the alienated, respected former player screwed by the Association, and we'd be bringing in Colin Miller or Sean Fleming or any of the other castoffs rattling around the Canadian system.

I'd back Hart if he was appointed, not because he's good but because he's a change and the team wants Mitchell out. He's not the best choice, but he's the only choice. The rumour is that Mitchell's "reassignment" involves taking on many of the tasks associated with the technical director, and the implication is that the Hart's going to be getting a new office.

Hart's the only candidate, but we all have our favourites. Rene Simoes is looking for work again, having got the axe from Fluminense a couple of weeks ago. Simoes was Linford's pick for manager back in 2007 until the CSA shot it down as too expensive. Jamaica happily leapt on our leftovers but Jamaica played terribly under the Brazil-born manager. His Fluminense experience was even less successful, but we wouldn't be Canada fans if we didn't leap on every big name that glanced in our direction, no matter how far past his prime he might be.

José Pekerman is another hot candidate, another guy supposedly Too Expensive for the CSA's tastes and already under contract to C.D. Universitario de Nuevo León. Unlike Simoes he's done well recently, and he's been linked to the job more than once. But if the CSA was looking his way, you have to think he'd have held off on taking a new club posting.

Finally, I'd be remiss in my duties as an amateur pundit if I failed to mention Holger Osieck. He last held a management job in 2008 with Urawa of the Japanese league, winning the Asian championship in 2007 and being sacked in early 2008 after a few bad games. It was self-evident even at the time that Osieck got a raw deal and Urawa was just looking for a chance to bring in a big name - they eventually settled on former Freiburg boss Volker Finke.

As the only Canadian manager to win anything in my lifetime there's a lot of nostalgia for Osieck, and he could make it work. Osieck's last Canadian team had a lot of guys like Mark Watson, Jason de Vos, and Tomasz Radzinski; players with big egos, strong opinions, and who thought they were doing Canada a favour just by showing up. Radzinski is still around (and still a brilliant player) but won't be for long, and he's mellowed out with age. He might consider Osieck a positive relief following Yallop and Mitchell. Watson and de Vos, of course, were sent to the glue factory long ago, and aside from fringe guys like Jim Brennan and Greg Sutton today's team has a much stronger character than 2003's.

But Holger wouldn't come back. He's sixty, he's done enough in the game for one lifetime, and he could get a lot better jobs than Canada's if he had a mind. The rumour is that his salary demands would be in the seven figures, which would cause the board to laugh so hard milk would shoot out of their noses.

Like it or not, unless the Association wins the 6/49, we're stuck with either Dale Mitchell or Stephen Hart. Let's just hope we're picking the lesser of two evils.