On Ritual: Welcome to the Maple Leaf Forever

Share All sharing options for: On Ritual: Welcome to the Maple Leaf Forever 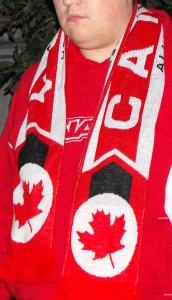 On October 15, 2008, I, along with fourteen thousand others, attended the Canada - Mexico World Cup Qualifying match at Commonwealth Stadium in Edmonton, Alberta.

Anybody reading this doubtless knows the story of that match. It was an important game for the Mexicans but utterly meaningless for the Canadians. It was an opportunity to go and have a stupidly good time without having to worry about the result.

Naturally, no effort was spared to help get Canada the win. An entire table full of banners were brought in, and their bearers recited the matches those banners had hung at with the memory of seasoned historians. Lucky clothing was brought out of storage from the last match. Chants were prepared and bellowed with all the gusto human lungs could manage. A couple dozen diehards braved hill and bewildered citizen to march through one of Edmonton's most miserable districts to the stadium, where those banners were unfurled with more attention than such heavy burdens usually receive.

We had a hell of a time, but there was more to it than that. Maybe the single most remarkable thing about sports is the way that we wrap ourselves in the trappings of ritual and superstition. At the Honduras game in Montreal, I desperately tried to find a Voyageurs scarf to give some red to my outdated black Canada shirt. In Edmonton I got one for the best $25 I'd ever spent, wore it for probably the only time until the Gold Cup on Wednesday, and reverentially brought into a place of honour as soon as I got home. In Montreal we had endured an ugly loss, in Edmonton we had delighted in a spectacular draw. That was good enough for me.

There's something almost spiritual about these football traditions. They are as peculiar to us as fingerprints, and yet when we see a Toronto FC fan hefting a cucumber or a Canada fan wearing a Soviet flag as a cape or anything else you care to see, the complete illogic of it is discarded in favour of tolerance and, if the mood is right, embrace (ask the nearest veggie dealer to BMO Field how he does on match days sometime). It's probably my favourite thing about the sport.

And if there's one utterly sacrosanct tradition, it's the tradition of sitting down in a pub with your buddies talking about the team, the match, and the game.

Unfortunately, ours is a hell of a country: when they made our motto ad mare usque ad mare they weren't kidding around. Football is a fringe sport in Canada, and the doors of the pubs are closed to us come hockey season. But the chattering must continue. 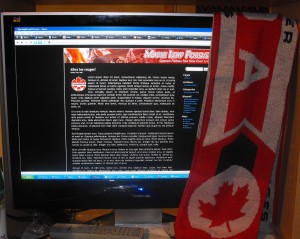 So, what's one more pointless ritual that regardless makes things a little more fun? Welcome to the Maple Leaf Forever.

Blogs being blogs, you're not often going to see anything that rocks your world, and our ambitions are suitably modest. This isn't meant to be an elite batch of highly intelligent bloggers churning out a hundred pages of purple prose to suggest that Dale Mitchell is a bad manager. Nor is it meant to be a pulpit to preach from regarding preferred players or important squad issues. It's no more and no less than a replacement for those drunken rants at one A.M. clutching one's fifth pint of Guinness. One more ritual, to keep us alive within that hideous desert between World Cup Qualifying and the Gold Cup, and to events beyond.

Moreover, what Canadian national team blogs are out there are usually one-man efforts. This is great for what it is, but there's a niche there to be filled. The Canadian football world is still pretty small, so why not take a crack at it ourselves? Even if we suck, at least we can say we put forward our best effort - a rationalisation that should be familiar to Canada fans everywhere.

I've attended Canadian matches, junior and senior, from Victoria to Montreal. One of our writers has never attended a Canadian match in person. There are doubtless readers and commenters who will have enough experience to make me look like a newborn. Good. What's the point of hearing an opinion when they're all the same as yours?

Welcome to the Maple Leaf Forever. We can't offer you a drink, but at least the football's fresh.