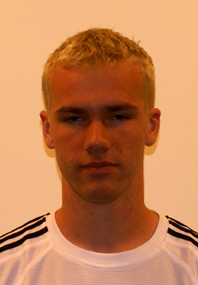 This is Jacob Lensky, wearing a look taken straight from the "guy you warn the flight attendant about" collection. Never has the term "mug shot" been more appropriate. From the time I saw it, I always thought that this picture made him look like he was in the dock for touching little boys or something. Then again, the Canadian Soccer Association has been known for many things but "a creative and skilled media department" has never been one of them.

Yes, this picture was taken from the CSA's website. I suspect it might soon become a collector's item because - in the biggest twist since the last one - Jacob Lensky, a man who has raised changing his mind to an art form, declined an invitation from Stephen Hart to our central European friendlies in favour of playing with the Czech U-21 team. Yes, he declined an invitation to a pair of full internationals in exchange for playing youth football.

Like Canada, the Czech Republic failed to qualify for the forthcoming World Cup in South Africa. They're better than we are, of course, but the margin isn't as considerable as it was in the past and the Czechs are getting older rather than younger. There was even a rumour that the Czechs would be playing us in one of our November friendlies that ended up going to Poland, which is surely a sign that you're starting to slip down the table. However, Jacob Lensky has allegedly looked at them and said that "you know what? That U-21 team sounds good!" Now, in fairness, the Czech U-21s are going to the World Cup, whereas ours are not, but that's still a pretty ridiculous decision, particularly since the bizarre weightings given to each confederation in U-21 World Cup qualifying means that it's a much looser test of a nation's relative skill.

No, I'm not here to make any snide remarks about the "treason scale" or to say that Jacob Lensky is now worse than Hitler. The only reason I thought that Lensky would be true to the Canadians was that I didn't think the Czechs would want him. Apparently his strong showing at left back with FC Utrecht in the Eredivisie has opened some eyes in Europe, and he's probably won a spot fair and square. He's starting for a surprisingly strong team in a vastly underrated league and doing well there; why wouldn't the Czechs want to give him a look?

Let's just remember the reason why Lensky is on FC Utrecht in the first place. "Feyenoord is saddened by the player’s departure, given that his footballing qualities were unquestionable," in the words of Feyenoord's then-director of football Peter Bosz, after the Dutch giants courteously released Lensky to return to Vancouver after he retired from football and declared his intention to never ever strap on a set of studs again. Almost exactly a year later he returned to the Eredivisie after training with the Vancouver Whitecaps, signing on with Feyenoord's rivals in Utrecht. Feyenoord, having given Lensky his release under what turned out to be false pretense, didn't receive a transfer fee in exchange for serving a promising youngster up to a rival on a silver platter.

That's without even getting into his earlier youth career, where he played for almost every halfway decent academy in Europe before leaving, not because of a lack of skill but because his family had some problem with this or he wasn't adjusting well to that or in general being a grotesque prima donna entirely out of proportion to his admittedly considerable talent. To quote Lensky in a rather ill-headlined interview with Red Nation Online:

People enjoy talking about me, my brother and father like it's some pity story, but people don't know what they're talking about so those keyhole theories just need to stop.

Well, your father yanked you across the universe to satisfy his own ego to have a son playing as a superstar in professional football, and his pressure drove your supposedly older brother out of the game entirely. I'm not making these things up; talk to the guys who witnessed it. And now you're taking a big risk and throwing away your Canadian eligibility so you can play for the youth time of your father's homeland? Where's the keyhole theory, Jacob? It is a pity story. And what a shame you've taken the only country that hasn't rejected you so far and turned that pity into anger.

I'd say that I wished Jacob the best but I don't, of course. Well, maybe I do. I hope that he puts the bravado, bluster, and pressure behind him and finds an occupation that he really loves, rather than football which his own interview indicates he sees as a mercenary, merely a means to an end. I wish him nothing but ill on the pitch, but maybe what's best for Jacob Lensky the athlete isn't what's best for Jacob Lensky the man.