It's the Seven Years War All Over Again!

Share All sharing options for: It's the Seven Years War All Over Again! 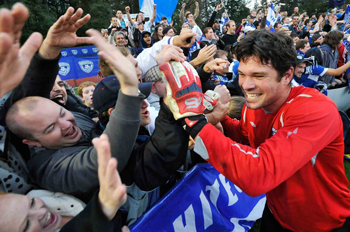 I've been holding off on writing about the USL Division One playoffs so far. At first, it was because I was lazy and busy. My real job has been pretty packed, and I recently got a fake job writing about hockey for SBNation.com, which pays very poorly but infinitely better than this blog does. Hockey may be my second-favourite sport but it, in strictly relative terms, sells.

Then the Whitecaps beat Charleston and I said "why write about it? they're going to lose the away leg anyway." Then they didn't (Jay Nolly is magic), and I started to get superstitious. By the time the Whitecaps clung to their fingernails to a 3-3 draw in Portland, a game I watched with a heart-pounding combination of delight and mortal terror, not writing about the games had become a full-blown obsession. It was working so far! What if I write about the Whitecaps and Impact and they both lose? Considering my first post to this site was a screed about Santos Laguna stomping on the Impact like the Mexicans were Columbus cops, it seemed better to avoid the subject altogether.

But now, fuck it. My Whitecaps may lose but Canada is certain to win. Vancouver vs. Montreal, west vs. east, Anglos vs. Frenchies. If we could get an argument on the merits of Toronto FC vs. the USL-1 two, we could work in a we-all-hate-Toronto angle and cover every granule of the Canadian soccer psyche. Wait! Thanks, the Voyageurs!

What am I going to do, provide cogent analysis? Jay Nolly is utterly fantastic. Matt Jordan is pretty fantastic himself. Marcus Haber, Charles Gbeke, Marlon James, and Randy Edwini-Bonsu are the best strike force in USL-1. What a shame about the midfield and defense, which is where Montreal ought to exploit Vancouver like a Downtown Eastside junkie desperate for a fix. But you knew all that already, unless you're an MLS-only sort of "fan" in which case why have you even read this far?

Really, I owe the Impact something. They're the reason I realized I was a Whitecaps fan in the first place, when they blew the last match of the Voyageurs Cup so shamefully and I swore using words I didn't even realize I knew. That's the sort of debt that can never be repaid. On the other hand, Montreal was also the home of my least favourite experience as a Canadian football fan, standing in the stands of Stade Saputo having beer tossed at me and walking back to my hotel down Rue Ste-Catherine seeing a bunch of cars with Quebec license plates flying Honduran flags while honking their horns triumphantly. Je me souviens my ass.

Playoffs in football are said to be sacrilege. Every great league in the world settles its champions by the standings, not by a contrived cup contest. Not even a Chelsea fan would argue they were champions of England last year by virtue of their FA Cup win.

But here's what I know. Portland were USL-1 regular season champions this year by a walk. Without the playoffs, I'd be sitting at home wondering if there was some Argentinian league action to watch. Instead, seven teams still had a chance at ultimate glory. Rather than putting away their title with a win and two losses or three draws or whatever they might prefer, they were tested in a must-win situation against a blood rival and found wanting. Montreal, who were left for dead not so long ago, would never have had the chance to scrape and claw and fight their way into a final opportunity that they never deserved until those last weeks where they earned it completely.

Let us suppose that the purpose of football is not to be absolutely fair. Nobody truly loves sports because they want to see the best team win. What we want is excitement, the chance to never say "die", the agony of losing the title you deserved making it all the sweeter when you win the title you didn't. What we love is standing in the stands with our supporters knowing that, while Portland should win, there's just enough doubt in those six little letters to fill our hearts with hope. Knowing that, even if we were worse on the road than Diego Maradona on a Monday morning, we still had a shot.

Look at it this way. You can't tell me, if the Columbus Crew win the MLS Supporters Shield and face a playoff with, to pick a team that could conceivably be the last playoff seed, Toronto FC, that both sets of fans wouldn't treat that match as the most important battle since Stalingrad.

They say Don Garber is in Europe imparting his wisdom to the European football czars. Mostly he's supposed to be talking about sustainable wages and cost certainty and other important parts of the game. But he should take along a tape of the Timbers Army and the Southside waging a verbal war at PGE Park in a match that never could have happened anywhere in Europe, and say how is this not better?

Tradition? Tradition is what you call a ritual when there's no good reason to keep it.